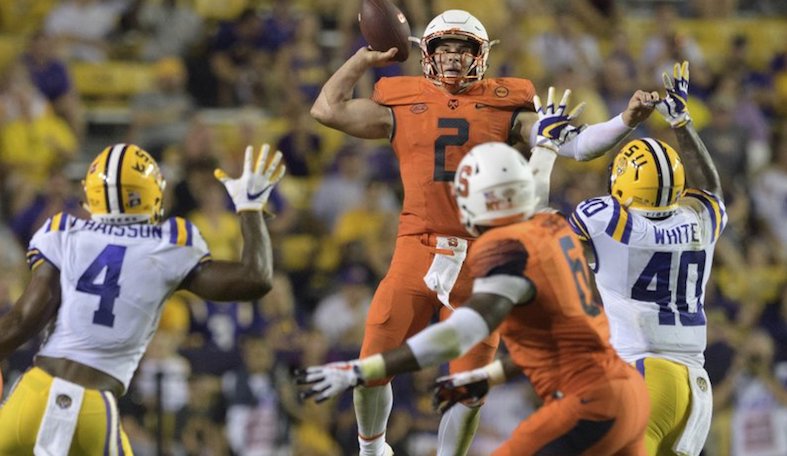 The ACC is a bit of a crossroads point when it comes to talent at the tight end position. Two seasons ago, back in 2016, the league had a surplus of productive tight ends. You know the names, most (if not all) are gone now: Jordan Leggett, David Njoku, Bucky Hodges, Jaylen Samuels (if you considered him a tight end at the time), Cam Serigne — the list goes on.

For the 2018 season, only three tight ends with at least 25 receptions last season return to ACC programs, and one of those players — Brandon Fritts of UNC — is recovering from an offseason ACL injury. It will be interesting to see who, of this batch of players, steps up this season.

A former 4-star recruit, 2017 could be the season for Milan Richard to take on a more prominent role in Clemson’s egalitarian spread offense. The Tigers have so many weapons on that side of the ball; it’s tough for most players to carve out anything beyond an auxiliary role. However, Richard offers some potential at the tight end position — regardless of who is at quarterback.

The departures of Deon Cain and Ray-Ray McCloud to the NFL — 155 combined targets, per Football Study Hall — means a dispersal of targets should trickle down to secondary receivers. Richard is in line to benefit.

In 2017, Richard wasn’t a one-to-one replacement for the outstanding Leggett, but he was targeted 26 times (5.8 percent target rate) for 19 receptions, according to Football Study Hall — a catch rate of 73.1 percent. Richard hauled in his first career touchdown catch in the first quarter of Clemson’s home win over Georgia Tech.

There’s some untapped efficiency here, too, it seems: 9.1 yards per target and three receptions of 25-plus yards, including a 44-yarder in the opener against Kent State.

The 2017 season in Charlottesville was a bit of a breakthrough for Bronco Mendenhall. Virginia, led by a productive defense, won six times and returned to a bowl game for the first time since 2011. On offense, the Cavaliers weren’t without issues; however, UVA had its moments moving the ball through the air — with Kurt Benkert becoming the first 3,000-yard passer in program history.

While far from a big-play machine (6.8 yards per target), Evan Butts was reliable: fourth on the team in targets (39, 7.8 percent target rate), per Football Study Hall, and with a catch rate of 81.2 percent, which is outstanding.

For his career, Butts now has 55 receptions — six of which are of the touchdown variety. He will look to add to that tally with new quarterback Bryce Perkins.

Despite having one of the top quarterbacks in college football, the 2017 season was an arduous affair through the air for the Blue Devils. A trio of veteran receivers struggled to create enough separation and hold on to darts from Daniel Jones.

Tennessee transfer Daniel Helm, however, was a steadying force, at times, for Duke. Helm, who hauled in two touchdown receptions for the second straight season, was targeted on 7.3 percent of Duke’s attempts, per Football Study Hall — 31 total.

Helm averaged a solid 8.4 yards per target, and posted a Success Rate of 61.3 percent. That’s the best number of any returning ACC tight end — with at least 20 receptions.

Of his 22 receptions (71 percent catch rate), 16 went for first downs — 72.7 percent. This will be his third full season working with Jones as his quarterback, too; a big season could be on the horizon for Helm.

Similar to his offensive teammate — running back A.J. Dillon — Tommy Sweeney’s season took off at the midpoint of 2017. Over the final seven games, Sweeney collected 25 receptions for 390 yards (15.6 yards per catch) and four touchdowns.

For the season, Sweeney caught 36 balls on 67 targets — for more than any other returning tight end — for a catch rate of 53.7 percent, according to Football Study Hall. Sweeney was the second-most targeted (7.6 yards per target) receiver on BC’s roster; over 19 percent of the team’s targets were sent in the direction of the 6-foot-5 tight end.

In terms of Success Rate, Sweeney was a bit of a bright spot for a passing attack that had its issues in 2017: No. 1 on the roster in Success Rate (minimum of 30 targets).

Sweeney is a bit of a big-play magnet, too: 24 of his 36 receptions went for first downs. He also snagged 11 passes of 15-plus yards, and five of 25-plus yards.

More good news for Sweeney: quarterback Anthony Brown, who suffered a non-contact leg injury against NC State, is expected to be a full-go for fall camp.

In two seasons under Dino Babers, Syracuse has one eight combined games, including a Friday night stunner of No. 2 Clemson, and emerged as one of college football’s premier go-go, pass-happy offenses.

However: even with starting quarterback Eric Dungey returning, Syracuse will look different offensively. Gone are wide receivers Steve Ishmael and Ervin Phillips, who combined for 305 targets (nearly 61 percent of Syracuse’s total targets) and 194 receptions last season. Ishmael (167) and Phillips (1380 ranked No. 1 and No. 3 in the ACC, respectively, in targets, per Football Study Hall.

This should mean big things for tight end Ravian Pierce — a dangerous play-action threat, who was fourth on last season’s roster with 38 targets (7.6 percent target rate). Opportunities are abound for Pierce, who recorded seven receptions of 15 or more yards.

Pierce hauled in four touchdown catches last season, including two in the shootout against Wake Forest. The 6-foot-3 tight end caught 30 of his 38 targets for a catch rate just shy of 79 percent, which is sizzling, and averaged 7.3 yards per target.

All in together now

(Note: Success Rate is Football Outsiders statistic that measures the success/efficiency of every play in a game. For college football, this relates to a player or team gaining 50 percent of necessary yardage on first down for a new set of downs, 70 percent on second down and 100 percent on third and fourth down.)

The Top 5 Running Backs in the ACC — headlined by Akers, Dillon