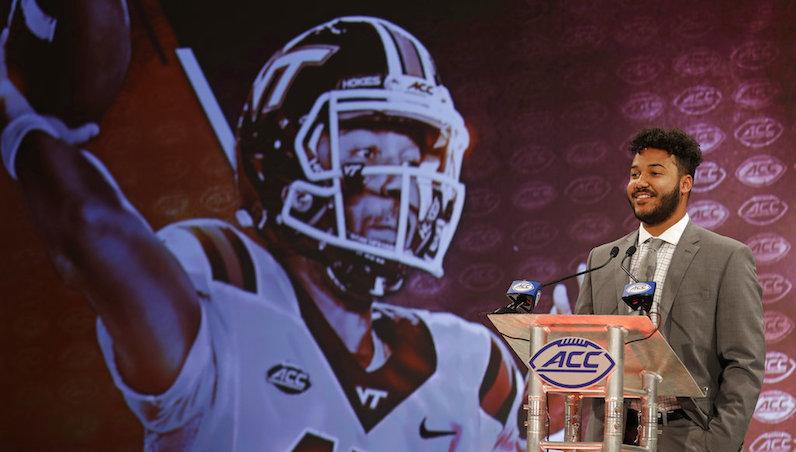 For three straight seasons, Virginia Tech has featured one receiver with 100-plus targets, per Football Study Hall. Back in 2015 and 2016, that was Isaiah Ford; last season, it was Cam Phillips (107), who was one of seven ACC players with at least 100 targets in 2017.

After a shaky offseason, the Hokies return Josh Jackson at quarterback; however, with Phillips in the pros now, Virginia Tech will have to find a new signature perimeter playmaker.

Tech will also be without veteran wideout Henry Murphy (23 targets, 10 receptions), who transferred out of the program in June.

For Virginia Tech, fortunately, the cupboard isn’t dry — even if an obvious lead dog doesn’t quite exist. The Hokies return five wide receivers that recorded at least 12 targets last season, according to Football Study Hall. At the top of the list is Washington D.C. product Sean Savoy.

The above the above receivers are sophomores: Savoy, Grimsley and Patterson — a redshirt player. Carroll is the veteran of the group: a redshirt senior who caught 15-of-18 targets, for a catch rate of 83.3 percent, and a Success Rate of 55.6 percent, which is great.

Over the last two seasons, Carroll has snagged 33-of-43 targets — a catch rate of 76.7 percent. In 2017, seven of Carroll’s receptions went for first downs, including four on third down. He’s a productive slot receiver, but missed six games with a foot injury.

Together in 2017, Savoy and Kumah combined for 115 targets — nearly 30 percent of Virginia Tech’s total targets. Savoy posted a Success Rate of just 35.5 percent, per Football Study Hall, which needs to improve if he’s to be WR1. There is some nice big-play potential with Savoy, though: 11 receptions of 15-plus yards, and five catches of 25-plus yards.