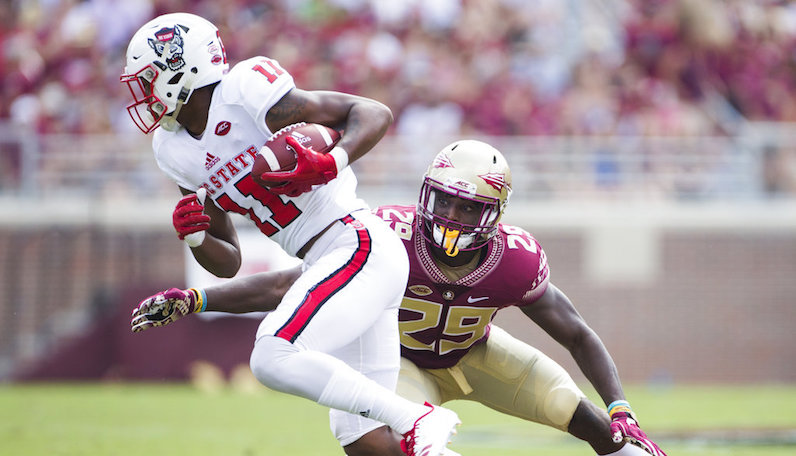 Over the weekend, the Pittsburgh Steelers selected NC State do-it-all star Jaylen Samuels. The ACC pass-catcher waited until the fifth round to hear his name selected; once it was called, though, it drove home this point further: one of the most versatile and reliable players in NC State history is done with his time in Raleigh. His records may hang for years to come; however, Samuels will never again split out side on the turf of Carter-Finley Stadium.

But that doesn’t stop the endless machine that is college football; in 2018, NC State will need someone to step up and replace the invariably productive Samuels.

The Wolfpack certainly has plenty of talent returning on the offensive side of the ball — starting with veteran quarterback Ryan Finley — and extending out to the receivers. Everyone knows the abilities of Kelvin Harmon and Stephen Louis.

A third receiver, Jakboi Meyers, could also find himself in a much larger role, too.

Over the last three seasons, no player on NC State’s roster was targeted more heavily than Jaylen Samuels. According to Football Study Hall, Samuels was targeted on 259 pass plays from 2015-17. The all-purpose back/end caught 196 of those targets — for a catch rate of 75.6 percent. That’s outstanding.

In 2017, Samuels was targeted a career-high 98 times; over 20 percent of State’s pass plays were directed towards No. 1. Harmon, however, was actually NCSU’s top player in terms of both targets (117, 24.5 percent) and yards (1,017). Samuels was the leading receiver — in part because so much of his offense was predicated on hauling in shorter shorter passes.

Harmon and Louis have the ability to work the short game; however, both of those guys stretch the field vertically with frequency, too. This helps open up all of the underneath stuff. Harmon and Louis both averaged over 14 yards per reception and over 8.5 yards per target, according to Football Study Hall.

Jakobi Meyers finished third on NC State’s roster in terms of targets — 98 (19.9 percent target rate) — and receptions (63). It won’t be just one player that makes up for the near-100 targets of Samuels, but Meyers is a guy that can work the slot, pick out holes in defenses and has the trust of Finley.

Meyers and Harmon both tied for sixth in the ACC last season with 19 third-down receptions; Samuels was right on their heels with 18, too. According to cfbstats.com, 18 of Meyers’ 19 receptions on third down were converted in first downs (94.7 percent).

In total, Meyers caught 66.3 percent of the passes thrown in his direction last season; this ranked second on the team, behind only Samuels, amongst players with at least 40 targets.

A converted quarterback, Meyers was named NC State’s most improved player in 2017. I think there’s a chance he could win that award again in 2018, and I say that in only half-jest.

Reggie Gallaspy could emerge as a solid replacement for Hines; there’s also 4-star freshman back Ricky Person. A few weeks back, in the spring game, a trio of previously lesser-used backs — Will Eason, Erin Collins and Damontay Rhem — combined for 38 carries. Eason shined: 99 yards on 13 carries and two scores.

NC State should find ways to run the ball effectively in 2018; however, the departure of Hines is a notable one, and with an experienced QB returning, plus a bunch of awesome receivers, the Pack could go pass-happy on offense if it wanted.

Let’s say that’s the case: NC State would then rely on lots of short patterns to keep the chains moving. Of the returning rotation players, Jakobi Meyers has the opportunity and ability to benefit the most.