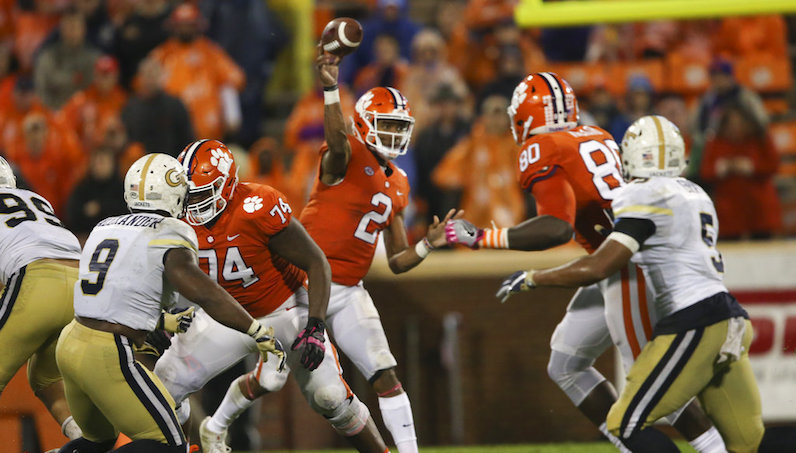 In the FBS there are only two players that have completed two-thirds of his passes, thrown for at least 1,500 yards and run for another 400 yards. One of those players is Ohio State’s J.T. Barrett — an outside contender for the Heisman Trophy. The other is another quarterback: Clemson’s Kelly Bryant.

Bryant has started all eight games for the Tigers this season, but he missed a big chunk of the Syracuse game. The junior quarterback entered the Friday night game with an ankle injury, and matters were made much worse in the second quarter when he suffered a concussion.

This is just a dumb mistake by Dabo, inexcusable. It was clear he shouldn't be out there, the further injury was inevitable.

Clemson would go on to lose to Syracuse — redshirt freshman quarterback Zerrick Cooper took all of the second half snaps.

The coaching staff deemed two weeks long enough for Bryant to recover from his concussion; in his next game, he threw for two touchdowns in his return against Georgia Tech.

All the weapons in the world, useless without the leader

On offense, Clemson is absolutely loaded with talent, regardless of position. The Tigers have future pros at all of the skill positions. However, in limited minutes without Bryant, they haven’t been able move the ball.

Clemson’s defense is good enough to win most games on its own, but against the wrong (or right) opponent, Clemson can go down.

The passing attack has dipped some with wunderkind Deshaun Watson off to the NFL; however, Bryant has mostly kept that afloat. All three of Deon Cain’s touchdown receptions have come from the right hand of Bryant.

Hunter Renfrow, the team’s leading receiver, and Ray-Ray McCloud both have good chemistry with Bryant, too. According to Football Study Hall, both receivers have catch rates above 80 percent — which is outstanding. McCloud has expanded his game with the help of Bryant, and has developed a knack for winning one-on-one battles on the perimeter.

The Tigers are one of the best running teams in the FBS. According to Football Study Hall, Clemson ranks No. 16 is Success Rate (48.8 percent) on running plays. Freshman Travis Etienne, who leads the ACC in yards per carry, is the team’s big play threat. The rest of the ground game is lower variance — efficient, but less explosive. Kelly Bryant is a huge part of that steady success.

Bryant ranks 10th in the ACC with over 14 carries per game, and that doesn’t even speak to his involvement in the team’s zone read game. Regardless, Bryan is No. 1 on the roster with an Opportunity Rate of 49.5 percent, according to Football Study Hall. This means on almost 50 percent of his carries — excluding plays when he’s been sacked — Bryant gains at least five yards. That’s the best rate on the team.

Clemson’s QB has 460 yards on the ground in 2017, officially. However, factor back in yards lost from sacks, and that total jumps up to 586, per Football Study Hall. Bryant is also one of only 18 FBS quarterbacks with at least seven rushing touchdowns this season.

The Tigers landed at No. 4 in the initial College Football Playoff rankings; for that to stick, Clemson needs to keep Bryant healthy and keep winning.