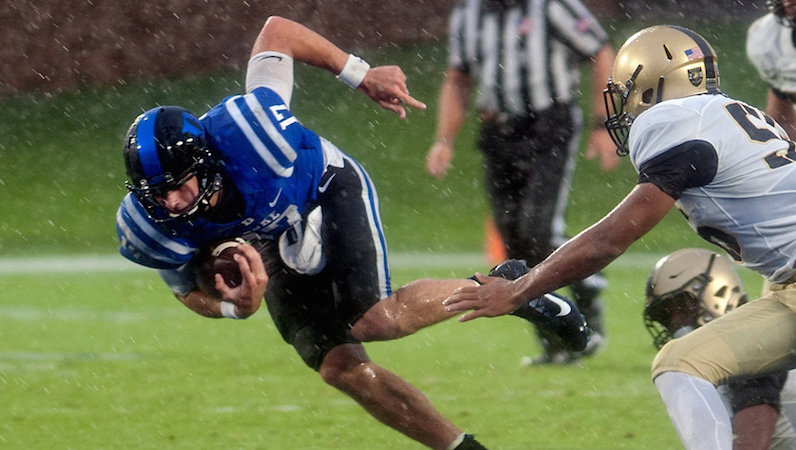 On Monday, we were reminded that Duke’s David Cutcliffe is not going anywhere, thanks to a new contract extension. That notion, along with the two-year extension, comes as no surprise. However, stakeholders in the Blue Devils football program have to be happy to know that their coach will be in Durham through 2021.

What should make them even happier, though, is the knowledge that Cutcliffe, one of the great quarterback coaching minds in America, will have three more years to work with his star pupil: Daniel Jones.

Jones was thrust into high-leverage minutes as a redshirt freshman and delivered. Now, Duke has a foundation to build around for the next three years.

Pressure pushing down on me

ESPN’s David Hale tweeted on Monday that Jones was one of the ACC’s best passers under duress in 2016. Jones trailed only North Carolina’s Mitch Trubisky — the No. 2 overall pick in last week’s NFL Draft — in terms of completion percentage when under siege.

ACC stat of the day: Last year, Duke's Daniel Jones completed 46.4% of his passes when pressured, trailing only Trubisky among ACC QBs.

That is a remarkable figure. Jones was sacked 29 times as a redshirt freshman on a total of 459 drop-backs. This equates to a sack rate of 6.3 percent. Obviously, all 11 players on the field have an impact on this number, but it’s a reflection on the quarterback’s ability to get rid of the ball in a timely fashion, too.

That is a slightly better figure than fellow rookie quarterback Deondre Francois — 7.3 percent — but it’s another area for growth. Jones is an accurate passer; he finished fourth in the ACC in completion percentage — 62.8 percent. The more opportunities he has to distribute to his cast of playmakers, the better.

Jones has not arrived just yet, though. That is entirely fine, too; this will be just his second season of college football.

He has displayed the ability to go down the field with the ball, but a lot of Duke’s offense relies on short, safer routes. It was clear in Year 1 that Cutcliffe wanted to play it cautiously at times with his rookie signal-caller. Jones averaged just 6.6 yards per attempt, which ranked 10th in the ACC.

Therefore, it should come with little shock that some of Jones’ efficiency metrics are not off-the-charts great. For instance, Duke averaged just 1.27 isolated points per pass, according to Football Study Hall. That ranked No. 120 in Division I; the national averaged was 1.49.

In 2016, Jones ranked third in the ACC with 430 pass attempts — behind only Deshaun Watson and Mitch Trubisky. He average nearly 36 attempts per game. Despite the high volume, though, Jones completed 97 passes of 10-plus yards. That means just 22.6 percent of his attempts went for at least 10 yards.

That is the second-lowest number all starting ACC quarterbacks in 2016; only Virginia’s Kurt Benkert had a lower percentage — 21.4 percent. Georgia Tech’s Justin Thomas was No. 1 (38.5 percent), but that is a product of the Yellow Jackets’ low-volume boom-or-bust pass offense. Of players who recorded at least 400 attempts, Francois rated the best in this metric: 35.5 percent.

He was also one of just 15 players in the ACC last season to run for at least seven touchdowns. Jones posted three games with multiple rushing touchdowns, including a 28-27 win over North Carolina. All seven of Jones’ rushing scores came from within eight yards of the goal line.

It would be comical to imagine Lamar Jackson or Deshaun Watson-type runs from Jones. But this added mobility can be used by Cutcliffe. At the least, he is another red-zone weapon.