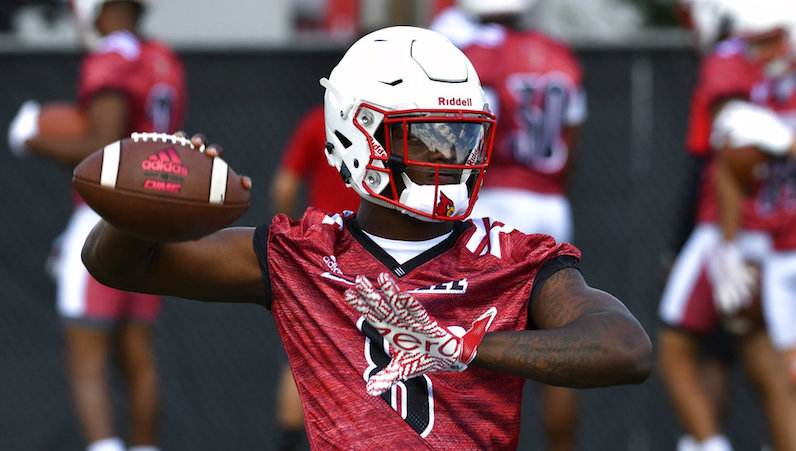 Louisville quarterback Lamar Jackson warms up before the start of the first open practice of the season, July. 31, 2017, in Louisville, Ky. (AP Photo)

Headlines were made over the weekend at Louisville football’s media day; the genesis of which can be traced back to a Pete Thamel column in Sports Illustrated from January.

In Thamel’s column on former Clemson quarterback Deshaun Watson, and how he will transition to the NFL, one anonymous ACC coach critiqued the pro prospects of Louisville’s Lamar Jackson:

We played he and Lamar Jackson, and Jackson has no shot at playing quarterback in the NFL. None. He can’t make the throws and can’t read coverages. He’s not going to have a chance.

Lamar Jackson, the Heisman Trophy winner, was asked about that quote this weekend. According to the Louisville Courier-Journal, Jackson was none too thrilled.

“Yeah, I heard Wake Forest. I heard (it was) the Wake Forest coach,” Jackson said. “But we won, so I don’t really care.”

Jackson didn’t state whether he was referring to Dave Clawson, Wake’s head coach, or one of the assistants. The junior also is likely referring Louisville’s comeback victory over Wake Forest last November.

In that game, the Demon Deacons lead 12-0 late in the second quarter. Louisville, however, took over in the second half, and ran off 34 unanswered points in the fourth quarter.

Wake Forest’s defense did well in that contest against Jackson, though. The 6-foot-3 quarterback was mostly held in check: 145 yards and a touchdown through the air; 153 rushing yards on 22 carries.

Ah, yes. Who could forget this? The now infamous WakeyLeaks scandal also ties together these two programs. Louisville was one of the programs found to have obtained game plan information from former Wake Forest coach and radio announcer Tommy Elrod.

Elrod shared information with Lonnie Galloway — Louisville’s co-offensive coordinator and a former assistant at Wake Forest. Galloway was suspended for the team’s bowl game — a 29-9 loss to LSU in the Citrus Bowl.

Louisville and Wake Forest will meet this season on Oct. 28 in Winston-Salem.

How will Louisville’s thin D-Line handle the dismissal of Chris Williams?