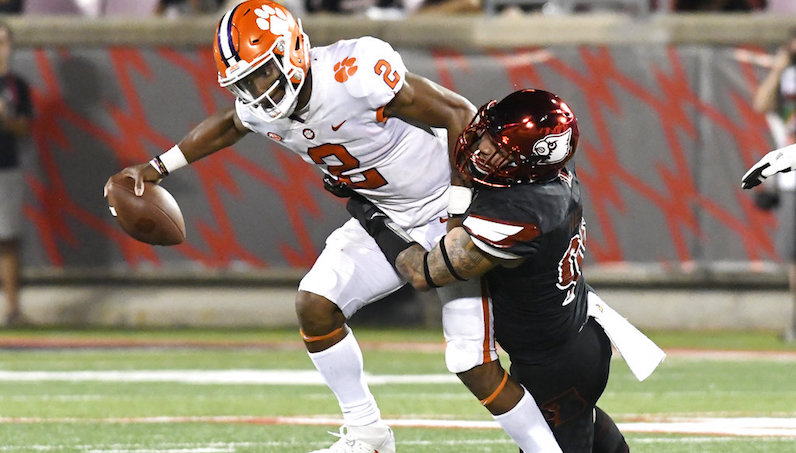 It’s incredibly early in the season, and it’s a bit silly to stack up Kelly Bryant with Deshaun Watson — the greatest player in the history of Clemson.

However, it bodes well for the Tigers that the offense — behind Bryant — looks prepared and razor-sharped; that element along with the team’s absurd defense is the recipe for another playoff invitation.

Other players on that list include Lamar Jackson, Phillip Rivers and Woody Dantzler. That’s something Deshaun Watson never accomplished.

As ESPN’s David Hale advances, though, that’s not the only thing that Bryant’s done better than Watson.

There's a long way to go, obviously, but given the competition so far, this ain't nothin'. Kelly Bryant is really damn impressive. pic.twitter.com/GcB9Ynv0rW

In his first season as a starter, Kelly Bryant has completed 68.7 percent (57-of-83) of his passes. That makes him one of only 21 FBS quarterbacks to attempt at least 50 passes and have a completion rate above 68 percent.

The two main beneficiaries of this passing attack are Ray-Ray McCloud and Hunter Renfrow — with Deon Cain not too far behind.

McCloud, a burner, has hauled in 16 of his team-leading 21 targets (76.2 percent catch rate) for 220 yards and a touchdown, per Football Study Hall. McCloud is more than a run-after-the-catch force, too; Bryant clearly trusts him on vertical routes. If he says that McCloud has a one-on-one matchup, he will loft it up. This is why McCloud is averaging 13.8 yards per catch and 10.5 yards per target.

Renfrow just continues to be one of the most reliable pass-catchers in America. The junior receiver works from the slot; he has 15 receptions on 16 targets — a catch rate just under 94 percent. Additionally, he’s one of the best at moving the chains. According to cfbstats.com, Renfrow has nine first down receptions on the season — 60 percent of his catches have afforded Clemson a new set of downs.

Cain hasn’t quite gotten going — yet. He’s still had a solid start to the season, though: eight catches on 15 targets and a touchdown. Offsetting penalties brought back a would-be TD catch against Louisville, too.

The name of the game is dual-threat; outside of Lamar Jackson, Kelly Bryant is as dangerous of a runner that exists at the quarterback position. So far in 2017, Bryant is one of only 10 FBS players — regardless of position — to run for at least five touchdowns this season on 50 or fewer carries.

UNC’s Michael Carter is the only other ACC player that can make that claim, too.

If you remove lost yardage from sacks, Bryant running number are even more jaw-dropping. Per Football Study Hall, Bryant has 222 yards on 36 carries — and five touchdowns.

In the win over Louisville, Clemson carved up Louisville defense on designed runs; it was one of the best performance’s of the Dabo Swinney era.

Clemson has a chance to make modern-day ACC history