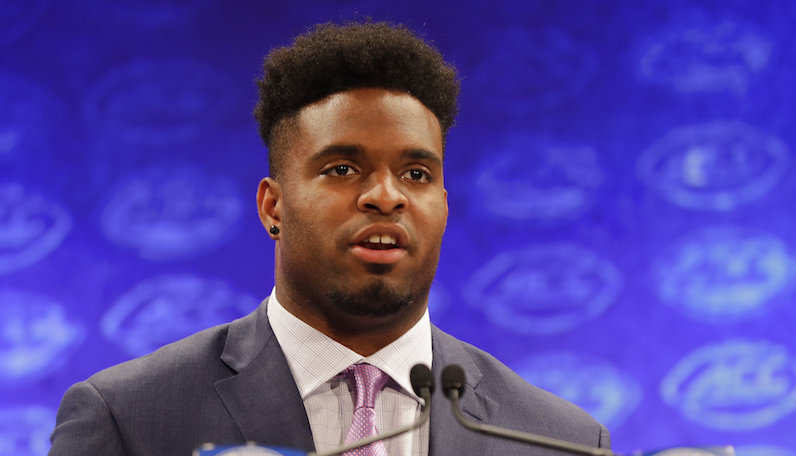 Another day, another offseason list; tell me you aren’t excited. ACC football teams returned to the practice field with the opening of fall camp this week. To help usher that in: here’s a ranking of the top five linebackers in the conference, which is led by Duke’s star Joe Giles-Harris.

One half of the one of the best linebacking duos in college football, Pinckney returns for his third season as a start at The U. With 26 starts under his belt, Pinckney is just a junior, but one of the league’s most experienced defenders. A versatile player, the 6-foot-1 backer was a big part of Miami’s defensive resurgence in 2017: No. 22 in the FBS in S&P+, according to Football Study Hall.

As a sophomore, Pinckney recorded 68 total tackles (48 of which came against the run, an outstanding number) — 11 for loss, a top-10 number amongst ACC linebackers — 3.5 sacks and an interception. Pinckney, a playmaker who pursues with speed, was one of only nine ACC players in 2017 to record at least 60 tackles, three sacks and an interception. According to Pro Football Focus, Pinckney was charged with only 12 missed tackles last season.

From walk-on to superstar: welcome to the story of Oluwaseun Idowu. After a solid 2016 season, Idowu became one of the most productive player in the ACC last year: 94 total tackles (13th in the ACC), 11.5 tackles for loss and five sacks (18th in the ACC).

According to Football Study Hall, Idowu led Pitt with nine run stuff — tackles made at or behind the line of scrimmage. He’s an absolute force for Pat Narduzzi’s Panthers; Idowu was 322 run snaps during the 2017 season, per Pro Football Focus, and made a total of 28 stops on those plays — 8.7 percent. (These are run plays that end up in a loss for the offense).

In total, Idowu made 36 unassisted tackles against the fun, and missed just four, which is outstanding.

For the third straight season, Quarterman will team up with Pinckney in the middle of Miami’s defense. What a relief that must be for Mark Richt.

The 6-foot-1 Quarterman is a tackling machine for the Hurricanes — with 167 total tackles in 26 career games, including 17 for loss. According to Football Study Hall, Quarterman recorded 12 run stuffs — tackles at or behind the line of scrimmage. Last season, Quarterman was one of only three ACC linebackers to collect at least 80 tackles and defend five or more passes.

He also recorded 2.5 sacks and recovered a fumble during the 2017 campaign — for a defense that finished 13th nationally in Havoc Rate: 19.8 percent.

Simply put — if you don’t bring the proverbial it, you don’t play for Clemson’s stacked defense. Well, few Tigers saw more defensive snaps than Joseph in 2017 — 613 in the first 13 games of the season, per Pro Football Focus — who recorded 96 total tackles (No. 11 in the ACC), including five for loss.

Over the last two seasons, Joseph — playing behind Clemson’s absurdly good defensive front four — collected 202 tackles, with 16.5 of those for a loss. According to Football Study Hall, Joseph forced two fumbles last season (three in his career) and recorded a team-leading 15 run stuffs — tackles on run play at or behind the line of scrimmage.

When it comes to linebacking in the ACC, make sure — whatever you do — to respect the hyphen. Joe Giles-Harris is very good at football.

In the middle of Duke’s defense, Giles-Harris is a ruthless jack-of-all-trades: 125 tackles in 2017 (his second straight season of 100-plus tackles), including 16 for loss, 3.5 sacks and an interception. Over the last two seasons, Giles-Harris has 25.5 tackles for loss in 25 games — which seems decent.

Against the run, Giles-Harris is unmatched in the conference. According to Football Study Hall, Giles-Harris recorded 24 run stuffs — one of the best numbers in the ACC. Giles-Harris is unblockable at times, shedding helpless linebackers as he collapses on ball-carriers like a heat-seeking missile.

According to Pro Football Focus, Giles-Harris faced a total of 424 run snaps during the 2017 season. On those plays, he made 65 tackles — 40 unassisted — and missed just two tackles. The 52 run stops Giles-Harris bagged were tops amongst all inside linebackers last season.

But wait, there’s more: Joe Giles-Harris is pretty darn good against the pass, too.

The Top 5 Cornerbacks in the ACC: FSU’s Levonta Taylor sets the bar high