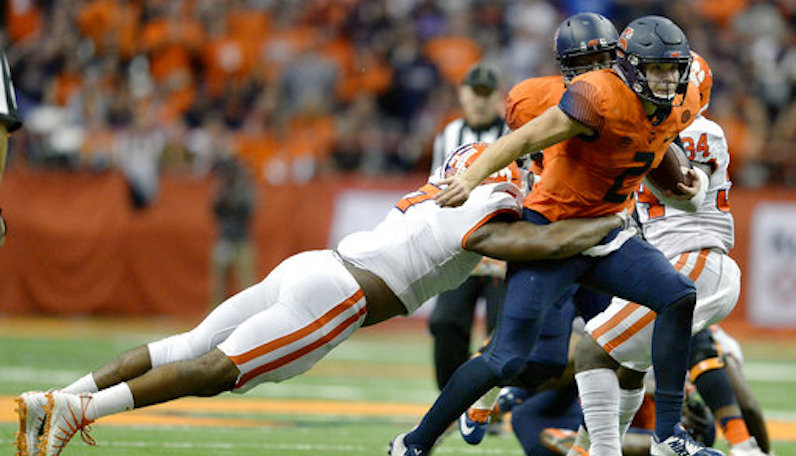 Independent from Syracuse’s team success, which is a trickier subject to forecast, everyone knew that quarterback Eric Dungey would have a huge season. On offense, Syracuse plays fast — top 10 in the FBS in pace last season — throws the ball a ton, and loves to run the quarterback. The system is designed, if operated properly, to make quarterbacks look awesome.

What seemed preordained, though, was actualized last Saturday on a field in Kalamazoo.

It wasn’t Dungey’s sharpest game though the air — 7-of-17 (41.2 percent) for 184 yards and two touchdowns — but that shouldn’t be too surprising: there’s a learning curve here. While Dungey returns, the Orange are breaking in new personnel on the perimeter.

That’s no small feat, either: last season, Steve Ishmael and Ervin Phillips were high-volume target hubs on the outside of the offense. According to Football Study Hall, those two combined for 194 catches on 305 targets — a catch rate of 63.6 percent. Ishmael and Phillips were targeted on nearly 61 percent of Syracuse’s pass targets in 2017. These are absolutely massive numbers.

For comparison: the leading receiver against Western Michigan for Syracuse was Jamal Custis, who caught six passes on 10 total targets for 168 yards and two touchdowns. Last season, Custis got 14 total targets. According to ESPN, Dungey’s performance ranked third nationally in terms of Total QBR.

It’s worth noting, too: Dungey and Custis looked like a terrific combination. Dungey accounted for seven of the receiver’s 10 targets, which included five completions, two touchdowns and one absurd one-handed grab.

On the other hand, backup quarterback Tommie DeVito was just 1-of-3 for two yards on pass attempts to Custis.

(Note: Syracuse allowed just two sacks in this game, too, but both of them came with DeVito in at quarterback.)

As he’s been known to do throughout his career, Eric Dungey ran the football with force, too. Dungey scampered around Broncos to the tune of 200 yards on the ground — a career high. It was the fifth 100-yard rushing performance of Dungey’s career as well. Of that total, 164 rushing yards came in the first half, including some excellent reads from Dungey on zone-read plays.

Dungey had six carries of 10-plus yards, including three of 20-plus yards — both of which are tops in the ACC after one week of action.

This now means that Dungey has as many 200-yard rushing performances as the electric Lamar Jackson, officially. (Of course, if you added yardage lost from sacks back into the rushing totals, Jackson certainly would’ve had a few more.)

In fact, according to Sports Reference, Dungey became just the fourth ACC quarterback since 2000 to run for at least 200 yards in a single game — joining Jackson, Woody Dantzler and TaQuon Marshall. For his efforts, Dungey was named the ACC’s Quarterback of the Week. If I had to guess, this won’t be the last time that happens this season.