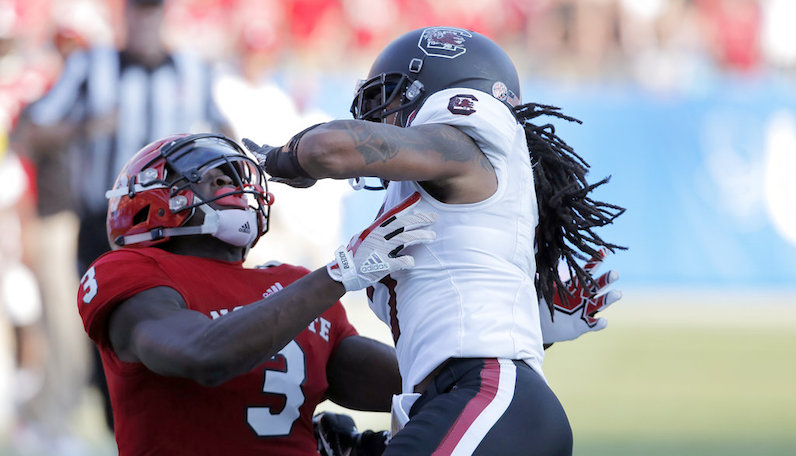 Just about every offseason preview for NC State football will start with quarterback Ryan Finley — who spurned the NFL Draft for another season in Raleigh. Shortly after that, the discussion will transition to the offensive weapons around him — specifically his trio of wide receivers: Kelvin Harmon, Jakobi Meyers and Stephen Louis.

In that group, Harmon is the headliner — the one with obvious NFL potential. He looks like a high draft pick: 6-foot-3, 213 pounds of pass-catching force. (You’ve seen the highlights — there are plenty of them.)

The always-excellent Football Study Hall tracks pass targets for receivers, which is a godsend. Thanks to their tireless efforts, we know that 11 players in the ACC last season recorded at least 90 targets. Of that group, seven players recorded at least 100 targets. Here’s a look at how that broke down.

As you can see from this list, NC State featured three players with 90-plus targets in 2017 — the most of any program: Kelvin Harmon, Jakobi Meyers and the legendary Jaylen Samuels, who finished as the program’s all-time leading receiver.

Pass-happy Syracuse is well-represented here, too, which comes as no surprise. The 167 targets for Steve Ishmael is a pretty incredible number. It will come as no shock: Eric Dungey of Syracuse (41.9) and Finley (36.8) ranked first and third, respectively, in pass attempts per game in the ACC.

Move The Chess Pieces Around

Back in April, I speculated on how NC State would try to replace the efficient, short-yardage receiving game of Samuels — now with the Pittsburgh Steelers. On paper, Jakobi Meyers is the obvious choice; the converted-quarterback is a powerful slot and third-down receiver.

However, I wonder if Eliah Drinkwitz and Dave Doeren will experiment more with Harmon — and move him to the interior with a little more frequency. In 2017, Harmon recorded just six receptions on third down. There’s an inefficiency here for State: take your best receiver and place him closer to the quarterback in leverage situations. (Of course, on the flip, it can be argued that Harmon’s ability to stretch the field — 8.7 yards per target — help open avenues underneath for Samuels and Meyers.)

With 1,479 career receiving yards, Kelvin Harmon has already cracked the top 20 in program history; in terms of career receptions (96) and touchdown catches (9), he’s knocking on the proverbial door in both of those categories, too. Obviously, with good health, he’s ready to race up those charts in what could prove to be his final season at NC State.

Samuels and Nyheim Hines (35 targets in 2017) are both in the professional ranks now; together they combined for 133 targets last season, per Football Study Hall. Assuming NC State plays at a similar tempo — No. 76 in the FBS in pace — and throws at a similar rate, those targets will be dispersed to other players. (NC State attempted 37.2 passes per game, roughly 49 percent of their offensive snaps.)

With Hines a member of the Indianapolis Colts now, and Finley in his third season, perhaps the Pack tips the scales, and chucks the ball even more in 2018.

For his career, Harmon has a catch rate of 59.2 percent. A goal for Harmon in 2018: bump that catch rate north of 60 percent — a good benchmark for receivers.

This is a super-rough estimate, but let’s say Harmon collects 130 targets; at a catch rate of 60 percent, that would equate to another 78 receptions. This would, hypothetically, knock his career total up to 174, which would be good for fourth all-time in program history — behind only Samuels, Jerricho Cotchery and Torry Holt.