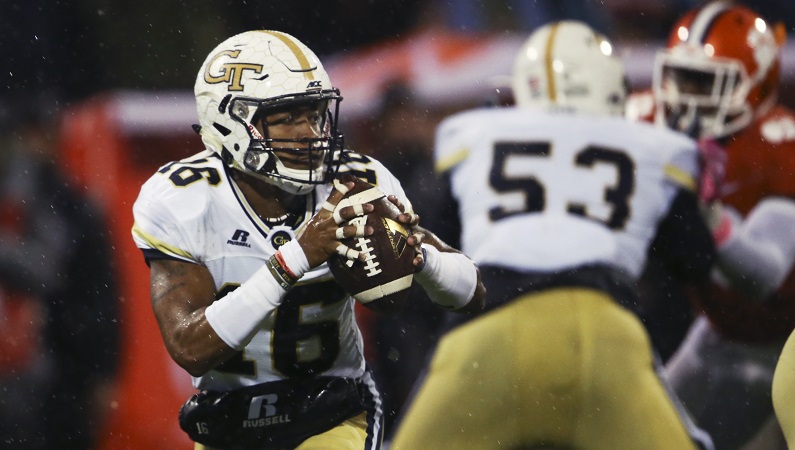 In an age of college football when times are looking for new, inventive ways to spread the field, and throw the football around. Last season within the FBS, there were six teams that averaged more than 50 carries per game. Three of those teams — Air Force, Navy and Army — are the service academies.

Only one of those teams, though, hails from a Power Five conference: Georgia Tech.

Paul Johnson is the coach of Georgia Tech; in these parts, he’s the kingpin of the triple option. On a related note: two of the other programs that averaged at least 50 carries per game — Georgia Southern and Navy — were Johnson’s two previous stops before landing the GT job in 2007. Including his time as a coordinator, the vast majority of Johnson’s professional life has been spent at those three programs.

During the 2017 season, Georgia Tech averaged 68.2 offensive plays per game — with only 10.7 of those coming via a pass. The Yellow Jackets became the first ACC team since the 2000 season to attempt fewer than 125 passes. They’re the only Power Five team to do this in that same timespan, too.

Dating back to the 2000 season, only nine FBS quarterbacks have attempted more than 100 passes in a season, and completed less than 40 percent of their attempts. Two of those players were Georgia Tech quarterbacks: Josh Nesbitt (2010) and TaQuon Marshall (2017).

Of that group, Nesbitt and Marshall are the only two players with quarterback ratings north of 100; Marshall, who is also an outstanding runner of the football, tops the list with a rating of 124, according to Sports Reference.

When Georgia Tech does throw the ball, you don’t need to break out the route tree: the Yellow Jackets go vertically down the field. Marshall is the only FBS player over the last 18 seasons to attempt fewer than 120 passes, complete under 40 percent of his passes, throw for 10 or more touchdowns and five or fewer interceptions. It’s just such an interesting profile for a quarterback in 2018.

On the flip side, though, Georgia Tech’s pass offense ranked second nationally in each of the last two seasons in terms of Isolated Points Per Play: 2.22 in 2016 and 2.44 in 2017.

According to Football Study Hall, Jeune was targeted on 52 times last season, which translate to 47 percent of Tech’s pass targets. It’s a unique set of circumstances, but that’s a big chunk.

Behind Jeune, that second most targeted receiver was the 6-foot-1 Brad Stewart — who caught only four passes on 16 targets. That’s a catch rate of just 25 percent. The only other player on the roster to record 10-plus targets: A-back Qua Searcy with 13.

For comparison, Clemson had 11 players with double-digit target numbers, including seven guys with 20-plus targets. Up at Syracuse, Ervin Phillips recorded 138 targets, which is 27 more than all of Georgia Tech’s receivers combined. Phillips, by the way, was the second most targeted receiver on Syracuse’s roster; Steve Ishmael collected an insane 167. Over his three year career, Stewart has 59 total targets.

Cruisin’ in the ATL

Atlanta is a city the embraces creativity and individualism; being different is a part of the city’s culture. That’s probably good for the idiosyncratic offense of Georgia Tech. There’s just nothing else quite like these guys in the Power Five.

All hail the triple option — and the wacky pass game that comes attached to it.