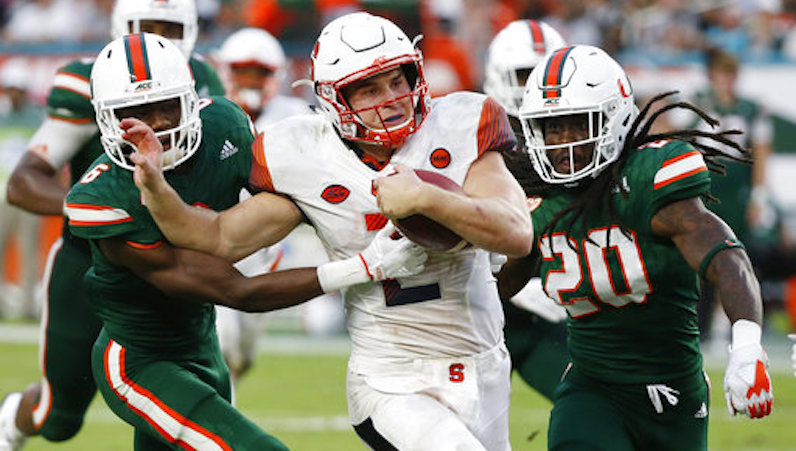 The Atlantic Coast Conference Football Players of the Week have been recognized following their performances in Week 1 of the 2018 season.

Dungey set the Syracuse school record for quarterback rushing yardage in the Orange’s 55-42 season-opening win at Western Michigan • Dungey ran for 200 yards on 15 carries (13.3 avg.) and scored a 27-yard touchdown early in the fourth quarter that put the game away • Dungey was also 7-for-17 passing for 184 yards and two touchdowns to finish with 384 yards of offense • Dungey’s rushing total shattered the previous Syracuse record for a quarterback of 156 shared by Bill Hurley and Terrel Hunt and marked just the fourth 200-yard rushing performance by an ACC signal-caller • Dungey now ranks third in the Orange career record book for most rushing yards by a quarterback (1,439) • The Orange scored on 9-of-11 offensive possessions with Dungey at the helm.

Anchrum helped Clemson’s balanced offense exceed both 250 passing yards and 250 rushing yards in Saturday’s season-opening win over Furman • Anchrum graded out at 94 percent with two knockdowns, according to the Tigers’ coaching staff.

Lindstrom graded out as one of the top Eagle linemen at 88 percent in a 55-21 win over Massachusetts • He played 65 snaps and recorded three knockdown blocks • Boston College finished with 598 yards of total offense, including 272 yards on the ground • The Eagles did not allow a sack in the win against the Minutemen.

Meyers pulled down a career-high 14 receptions in Saturday’s 24-13 win over James Madison • The 14 catches are the third-highest single-game total in school history, trailing only Jaylen Samuels (15 in 2017) and Torry Holt (15 in 1998) • Meyers tallied a career-high 161 yards despite playing the entire second half with a hurt ankle • Graded out at 98 percent over 47 snaps in the game.

Willis, playing in his first game since Nov. 26, 2016, delivered a standout performance in the trenches against a talented LSU offensive line • Willis posted a career-high eight tackles (four solo) in his first career collegiate start and recorded four tackles for loss – the first such performance by a Hurricane since 2008 • Willis – a New Orleans native – had one sack, one pass breakup and one quarterback hurry in a dominant effort.

In his first collegiate start, Ashby posted seven tackles, including two tackles for loss, and forced a fumble in Virginia Tech’s 24-3 season-opening victory over Florida State • Ashby’s forced fumble was the first of his career and led to a Brian Johnson field goal that put the Hokies up 10-0 in the first quarter • Florida State lost 11 yards on Ashby’s two tackles for loss.

In his first collegiate game, Farley had a sack and two interceptions in Virginia Tech’s victory over Florida State • Farley’s first career pick came on the first play of a Florida State drive that followed Virginia Tech’s punt block returned for a touchdown in the second quarter • His second interception came late in the fourth quarter, securing another time-consuming possession for the Hokies • Farley’s first career sack was for a two-yard loss and pinned FSU back to its own 10-yard line • He is the first Virginia Tech player since Greg Stroman versus Liberty in 2016 to register a multi-interception game.

Pitt opened the 2018 season in explosive fashion against Albany when junior Maurice Ffrench returned the game’s opening kickoff 91 yards for a touchdown • It was the first kick return score of his collegiate career and the first time the Panthers opened a season with a kickoff return for a TD • Ffrench added another touchdown later in the game on a nine-yard run to help seal the Panthers’ 33-7 win.

Surratt made his college debut against Tulane and recorded 11 receptions for 150 yards in the Demon Deacons’ overtime road win on Thursday night.