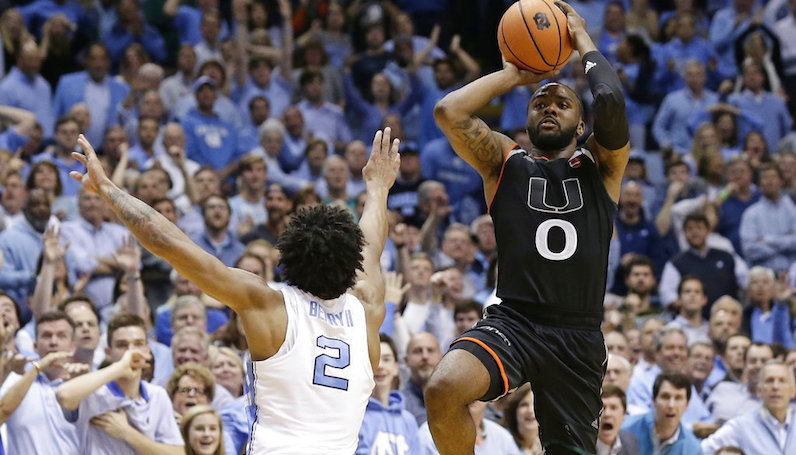 The Miami Hurricanes spoiled senior night in Chapel Hill with an epic win over No. 9 North Carolina. This was an up-and-down affair, with UNC trailing by 16 points early in the second half.

Joel Berry would not go quietly into the night, though. The senior point guard tied a career high with 31 points on 11-of-17 field goal attempts. With four second left, it looked as though Berry brought UNC all the way back; as he’s done so many times in his 137 career games, Berry came off a Luke Maye screen, and splashed a three-pointer, which tied the game at 88.

Before anyone could blink — or stop celebrating — Miami inbounded the ball to its own senior point guard, Ja’Quan Newton. With 20,000 Carolina blue-clad fans screaming, Newton drained the shot of his life.

Let’s take a quick look, however, at some of the improbable odds Berry and the Tar Heels nearly countered — before Newton’s third law, and half-court heave, took over.

Using win probability calculators from both ESPN and KenPom, here’s a look at just how unlikely of a comeback North Carolina almost made.

Living on a prayer

Ja’Quan Newton’s heave came from somewhere between the half-court line and the top of the three-point arc. Outside of Steph Curry’s wizardry, and the organized chaos of Jamal Crawford, that shot is challenge for almost everyone else on this planet.

For the season, Newton is shooting just 20 percent on three-pointers. That make was just his fifth of the season from deep — on just his 25th attempt. According to Sports Reference, Newton and FSU’s Trent Forrest are the only two guards in the ACC to play at least 500 minutes this season, and attempt 30 or fewer three-pointers.

Newton, according to Synergy, is shooting 40.6 percent (42.2 eFG%) on half-court jump shots off the dribble.

Regardless, the shot went through the hoop; it’s a tremendous moment for Newton, and a Miami team that’s now won three games in a row heading into its regular season finale with Virginia Tech.

Inside The Playbook: How can Duke utilize Trevon Duval in its half-court offense?