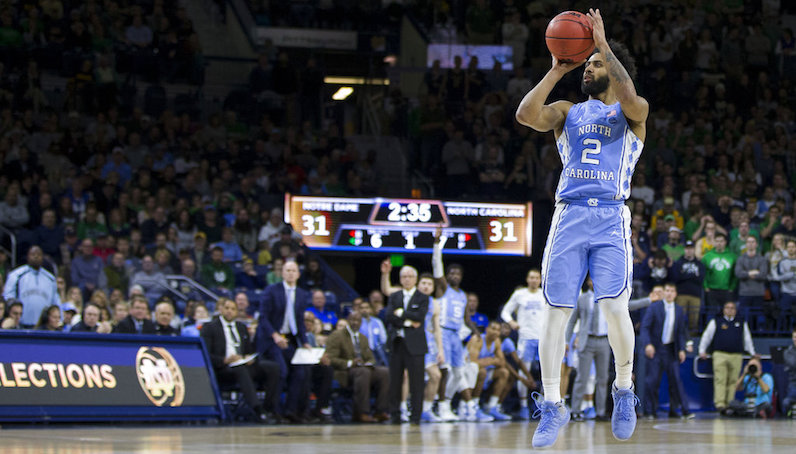 Earlier this week, during an appearance on The David Glenn Show, ESPN college basketball analyst Seth Greenberg mentioned how Joel Berry was the only player on this year’s North Carolina team to not have his role changed from a year ago.

“Excluding Joel Berry, everyone’s roles changed, and the game’s become more difficult for Theo Pinson because he’s not playing with as good players.”

That, however, may not actually be precisely the case. Yes, Berry is still playing lots of minutes as the team’s starting point guard. Of course he is. But with departures of Justin Jackson, Tony Bradley, Kennedy Meeks and Isaiah Hicks to the professional ranks, Berry is having to carry a larger burden of the offensive load.

The senior guard is shooting more frequently, and the results have been a little shaky.

After a preseason hand injury, Joel Berry started the 2017-18 season in a bit of a shooting slump. Now that UNC is approaching the midpoint of its conference schedule, the Tar Heels are 5-3 in ACC play. There a few interesting things to not in terms of Berry’s stat line.

Berry averages 17.6 points — a jump from last season: 14.7 points. It’s more than that, though. According to Sports Reference, Berry has a usage rate of 27.3 percent, which is an increase from 22 percent in 2016-17. This means with Berry on the floor, over 27 percent of UNC’s possessions have ended with him shooting, turning the ball over or committing a foul.

As his usage has increased, Berry’s field goal percentage, true shooting rate and effective shooting percentage have all dipped from 2016-17.

No one in the ACC has attempted more three-pointers than Joel Berry, so far this season; he has launched 150 attempts from beyond the arc in 20 games. While Berry is shooting more threes per game, he’s also playing more minutes than last season, and shooting more in general from the field, too.

About 51 percent of Berry’s field goal attempts are of the three-point variety; during his junior season, that attempt rate hovered just under 54 percent.

According to Synergy Sports, 9.6 percent of Berry’s possessions last season were spent in isolation. Berry shot 45 percent and scored 1.02 points per possession (a turnover rate of 9.3 percent). That ranked third in the ACC, and his effective field goal rate was an impressive 52.5 percent, per Synergy.

This season, 9.9 percent of Berry’s possessions are isolations, according to Synergy — so about the same. He’s shot just 28.6 percent on these possessions, though, scoring 0.89 points per possession (5.6 percent turnover rate) — seventh in the ACC (minimum of 20 possessions).

That has flipped some this season, though. According to Synergy, Berry has used 63 percent of his pick-and-roll possessions; on the flip side, he’s been a passer on 37 percent of said possessions. That may not seem like a big shift, but it demonstrates how the roster has shifted. More is asked of Berry.

Not only is Berry shooting the ball more: he’s also having to do so with greater defensive attention on him. Thus, his assist rate has dipped, too: down to 17 percent. Guys like Theo Pinson and Jalek Felton have taken on a larger share of the playmaking duties — both have assist rates north of 24 percent.

This UNC roster isn’t as talented as last season’s bunch; however, there are still some really good players on this list. If Berry can improve his shooting inside the arc (42 FG% on non-post-ups at the rim, per Synergy), and get to the line more — where he’s shooting 90 percent — than North Carolina’s offense may have an extra gear.

Jay Bilas: If Duke defends, the list of teams that cane beat them is really small