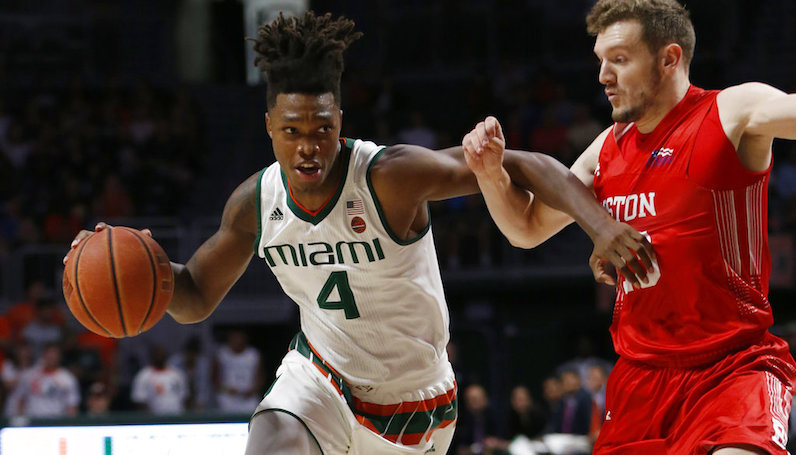 The expression “Next Man/Woman Up” in sports is bit of a misnomer. If a team loses one of its best players because of injury, suspension, personal reasons — whatever, it’s not so easy to just replace him or her with a backup.

That said, when Bruce Brown — one of the best players in college basketball — went down with a wrist injury, it didn’t hurt Miami that the Canes could turn to Lonnie Walker.

What does Lonnie Walker do well?

The most talked about freshman basketball player in the ACC this season will certainly be Marvin Bagley of Duke. But Lonnie Walker is really freaking good, and one of the best prospects in college hoops, too.

With Brown on the mend against Boston University, Walker was embedded into the starting lineup for the first time in his young career; he also played a career-best 28 minutes. It was more than that, though: Walker attempted 15 shots (a career high) and posted a usage rate of 41.7 percent.

This means nearly 42 percent of Miami’s possessions ended Brown shooting, drawing a shooting foul or turning it over. According to Sports Reference, Walker’s high usage rate prior to the BU game was 26 percent.

Walker has solid range on his shot; his release is quick, too. On spot-up attempts, Walker is shooting 44.4 percent (63.9 percent effective field goal rate), and scoring 1.32 points per possession, per Synergy Sports — No. 15 in the ACC.

(Note: Brown is expected to return for the team’s matchup with Hawaii on Dec. 23)

Miami’s offense is playing faster this season; average possession length has dropped to 16.4 seconds this season, after 19.3 seconds in 2016-17, according to KenPom. The Hurricanes love to run dribble penetration off high ball screens. Bruce Brown and Ja’Quan Newton formed a nice duo last season; Lonnie Walker and fellow rookie Chris Lykes have added to that this season, too.

As of right now, Walker isn’t a breakdown player on offense, but he can handle the ball and drive it. Walker is 4-of-7 (57.1 percent) on isolation shooting, per Synergy.

Walker helps give Miami a quartet are perimeter playmakers, and along with DJ Vasiljevic (42 percent on threes), another spacing agent around the drives and big man Dewan Huell (71.1 percent shooting around the basket, according to Synergy).

You won’t play for Jim Larranaga if you can’t defend. After finishing the 2016-17 season No. 25 in defensive efficiency, the Hurricanes are up to No. 4 this season. Despite a lack of experience, Walker is far from lost on the defensive end.

It helps that Walker can be explosive athletically, too. That’s reassuring to see, especially after Walker tore the meniscus in his right knee back in July. In Miami’s third game of the season, Walker injured his ankle against Florida A&M; he played just 10 minutes in that contest, but returned six days later in the team’s next game.

Will Malik Rosier start for Miami at QB in 2018?