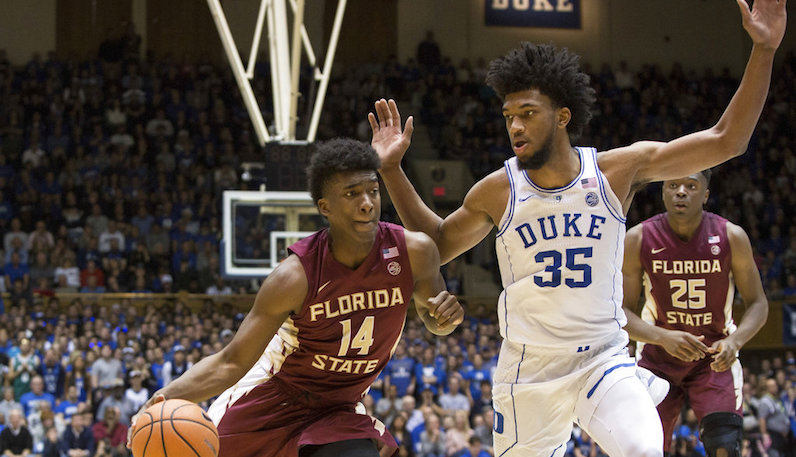 After a strong start to the 2017-18 season, Florida State has hit a bit of a rough patch recently. FSU has dropped four of its last six games; the two wins were a nail-biter over UNC and a double overtime affair against Syracuse. This can happen in the rough and tumble ACC, especially when your three top players depart for the NBA.

It was obvious when Jonathan Isaac, Dwayne Bacon and Xavier Rathan-Mayes decided to go pro that Florida State would need new players to step up. Terance Mann was the most obvious choice, and so far, he’s taken advantage of his opportunity for Leonard Hamilton’s ball club.

In the words of another famous Hamilton, “I am not throwing away my shot!”

Terance Mann missed Florida State’s win over Syracuse with a concussion, but he’s appeared in 17 games this season. In those 17 contests, Mann has been dynamic, especially at the basket.

In 2017-17, Mann played 25 minutes per game; that’s up to 29.2 this season. Mann has nearly doubled his scoring average — up to 15.5 points from 8.4 last season. And he’s greatly increased his usage, too: nearly 22 percent of FSU’s possessions end with Mann shooting, drawing a foul or turning the ball over. His assist rate has also spiked to 18.8 percent (2.9 assists per game) — up from 11 percent as a sophomore.

Mann has done all of this while simultaneously improving his efficiency, too. Part of that has to do with Mann turning the ball over less frequently; the other aspect of that is Mann’s proficiency around the basket.

On two-point field goal attempts, Terance Mann is 98-of-150 — 65.3 percent, which ranks 80th in the nation, per KenPom. According to Sports Reference, Mann is one of only 13 Division I players averaging 15 points, two assists and shooting above 65 percent on two-point attempts.

Duke’s Marvin Bagley is the only other ACC player currently hitting these impressive benchmarks.

Mann, according to Synergy Sports, is 54-of-72 (75 FG%) on non-post-up field goal attempts at the basket — scoring 1.57 points per possession. That ranks second — by only a hair — amongst ACC players with at least 30 attempts. Wake Forest 7-footer Doral Moore is tops: 1.61 points per possession.

That’s right: the 6-foot-6 Mann has been slightly before efficient at the rim than several taller players, including future pros, like Bagley, Wendell Carter and Bonzie Colson. Mann is the only player under 6-foot-7 inside the top 10 of this list.

Without Tate and Izzo, Nyqwan Murray looks to be FSU’s No. 1 receiver