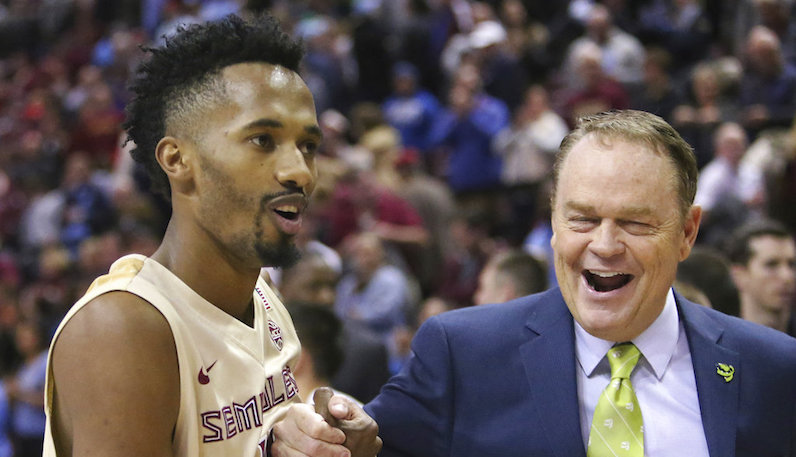 Florida State basketball is off to a 12-2 start, and a big part of the team’s success is one of the ACC’s early-season breakout players: Braian Angola.

The 6-foot-6 native of Colombia spent most of the 2016-17 season as a reserve shooter (21-of-50 on three-pointers) for the Seminoles. However, he’s taking on a much larger role this season. The departures of Dwayne Bacon and Xavier Rathan-Mayes opened a lot of playing time in Florida State’s backcourt; Angola is shooting his shot — both literally and figuratively.

FSU features a balanced scoring attack; five players average nine or more points. But the proficiency of Angola — in two of the money areas on the floor — is imperative for the Seminoles.

No such thing as faux deep

Braiain Angola has played 370 minutes across Florida State’s first 14 games — making 11 starts. Angola played 402 total minutes all of last season. His playing time has leapt — up to 26.4 minutes per game — as has his usage rate: from 18 percent to 21.5 percent, per Sports Reference.

The increased workload doesn’t faze Angola, though. He’s thrived with more opportunities. After a summer spent with the Colombian National Team in the Four Nations and 2017 FIBA AmeriCup Tournaments, Angola is making the most of his final college season.

In back-to-back games against Duke and North Carolina, Angola played 64 minutes, score 43 points and connected on 8-of-19 three-pointers (42.1 percent).

Angola is one of the best shooters currently in the ACC, and he knows where he’s best — beyond the arc: 63.4 percent of his field goal attempts are three-pointers. According to Synergy Sports, over 36 percent of his possessions are spot-ups. The senior wing has connected on 28-of-54 (51.9 percent) catch-and-shoot jump shots, and scored 1.56 points per possession — No. 34 in the nation, No. 2 in the ACC.

It’s important to keep good company, and Angola is one of only five ACC players currently shooting at least 42 percent from downtown on at least five three-point attempts per game. He’s joined on that last by four of the best sharpshooters you will find in college ball: Grayson Allen, Kyle Guy, Jordan Chatman and Ahmed Hill.

Are these free or not?

As a team, Florida State is shooting 38.6 percent on three-pointers, which ranks 53rd in the nation, per KenPom, and is on pace to be the best rate of Leonard Hamilton’s time in Tallahassee. The Noles, however, have struggled mightily from the free-throw line. FSU ranks 296th in the nation in free throw percentage: 66.5 percent.

That number would be a lot worse without Braian Angola, though. Angola doesn’t get to the line a ton — 2.7 attempts per game — but he’s shooting just a hair under 79 percent from the charity stripe this season — tops on the team. In close games, FSU will need Angola and C.J. Walker to handle and make free throws.

While Braian Angola prefers to snipe from 21 feet, the senior can finish around the cup, too. Angola is 27-of-45 on two-point field goal attempts. A big part of that efficiency is his ability to score at the rim — the other money area for offensive players.

On non-post-up attempts at the basket, Angola is 14-of-22 (63.6 percent) and has scored 1.32 points per possession. That ranks 30th in the ACC amongst players with at least 20 possessions; most of the players above Angola on that list on frontcourt players, too.

This efficient scoring augments some of the other facets of his game, too; Angola has some nice two-way skills. While on the floor this season, Angola has assisted on 20 percent of his teammates’ made field goals — third-best of Florida State’s roster.

Braian Angola and his teammate Terance Mann are two of eight ACC players averaging 13 points, three assists and at least one steal per game.

Duke Basketball continues to dominate above the rim on offense