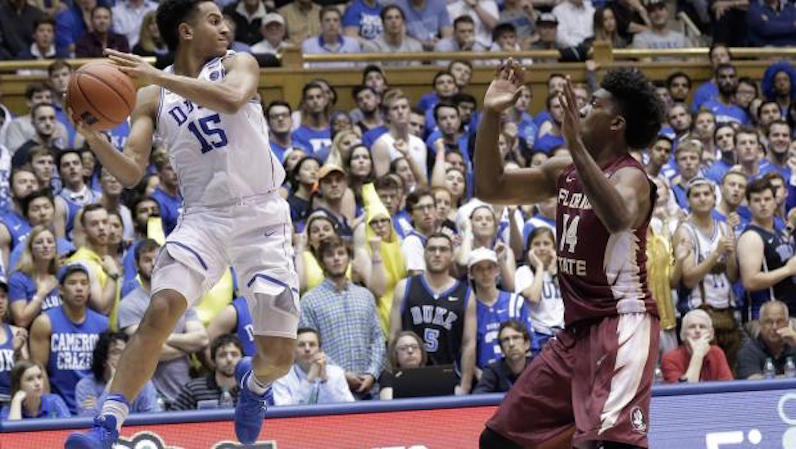 Frank Jackson (15) is trying to improve his stock at the NBA Draft Combine. (AP Photo)

There are but only a few teams that will have to replace more NBA-bound talent than Florida State. Jonathan Isaac is destined to be a lottery pick; Dwayne Bacon, the team’s leading scorer, is ranked as a top-50 draft prospect. Xavier Rathan-Mayes, who finally discovered the Fountain of Efficiency this season, is also headed to the draft.

Leonard Hamilton just agreed to a new contract extension and will be tasked with finding ways to replace this plethora of production. Going forward, the most important player for the Seminoles will be junior wing Terance Mann, who will finally have the stage set for a breakout season.

Utilities will rise next year

Mann appeared in all 35 games in 2016-17 for FSU and played 25 minutes per game — fourth-most on the team. When on the floor, though, he was primarily a cog in Florida State’s offense, which centered around the play of Isaac, Bacon and XRM. Mann, according to Sports Reference, used just 15.3 percent of the team’s possessions while on the court — a below-average number.

That will change drastically next season. Per KenPom, Isaac, Bacon and XRM each used more than 20 percent of Florida State’s possessions when on the court. Basically, touches and opportunities will rise for Mann, which will boost his overall utility.

This presents a serious opportunity for Mann, who excelled as an auxiliary player last season. Mann shot an impressive 61.1 percent on two-point field goals; he was rather efficient. There is a reason why he led the team in offensive rating — 120.1 points per 100 possessions (No. 122 nationally).

On offense, Mann is at his best when he is making a living at the hoop. According to Synergy Sports, Mann shot 60 percent and scored 1.25 points per possession on non-post-ups around the basket. That ranks 18th in the ACC among players with at least 80 of such possessions.

For a 6-6 wing, Mann is an excellent offensive rebounder, too. He grabbed 8.8 percent of the available offensive rebounds while on the floor this season — a number that would rank inside the top 375 nationally, according to KenPom.

However, an area of improvement for Mann will be his jump shot. He has attempted only 36 three-pointers in 1,453 minutes of play at Florida State. Per Synergy, Mann connected on just 36.7 percent of his jump shots in 2016-17.

With an increased volume of shots, and more defensive attention, it will be tough for Mann to raise that percentage, but if he can, it will be a major boon for the Seminoles.

It is important to note: Mann will not be on an island for the Seminoles. We joked about Florida State’s rotation this season, which seemed to be composed of everyone on the roster, including the managers, but that experience should pay off in 2017-18. That is good because Mann has the ability to create for others; he averaged nearly four assists per 100 possessions. It will be exciting to see how his playmaking skills improve.

C.J. Walker is an edgy point guard with some scoring juice; P.J. Savoy is one of the most underrated perimeter snipers in all of college basketball. Chris Koumadje is a lob dunk machine at the rim. Of course, the highly regarded Trent Forrest will have a larger platform next season, too. Braian Angola-Rodas splashed 42 percent of his threes.