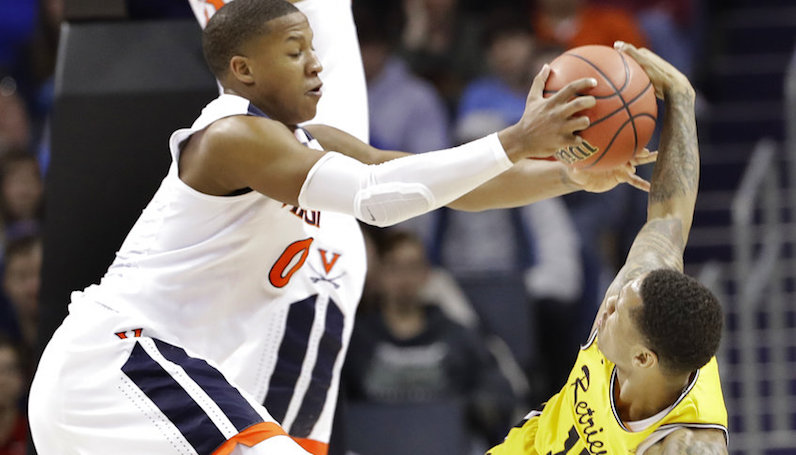 The famed Portsmouth Invitational Tournament takes place later this week in Portsmouth, Virginia. The event, which has been held since 1953, has helped unearth a variety of future NBA stars: Scottie Pippen, Ben Wallace, John Stockton, Avery Johnson — and more. In 2017, six of the 60 NBA Draft picks participated in the PIT.

The participants for this year’s pre-draft event include seven ACC players — some of whom are All-ACC athletes, like Virginia’s Devon Hall.

(Note: Notre Dame’s Matt Farrell is not included in this tweet, but he will play, too.)

With that in mind, here’s a look at one number to know on each former ACC star as they prepare to ramp up to June’s NBA Draft.

Hall is an intriguing prospect for a variety of reasons, starting with his ability to play both ends of the floor and defend multiple positions? Could he become another Malcolm Brogdon? Probably not; they aren’t the same player or type of prospect. There are similarities, though: Devon Hall, like Brogdon, is a terrific shooter.

As NBA teams increasingly rely on the three-pointer, and look for ways to further stretch the floor, more and more frontcourt players will be asked to efficiently shoot from beyond the arc. To counter this, though: teams will also need rangy defenders that can switch and check multiple positions.

Wilkins still needs to figure out his jump shot; however, his avenue to a pro career is through his handiwork as a versatile defender. Dating back to the 2009-10 season, Wilkins is one of only five ACC players (500 minutes minimum) to post a block rate above seven percent, a steal rate above two percent and a defensive rating below 90 points per 100 possessions.

NBA teams simply can’t have enough three-point shooting options; this movement could be the key to Bibbs possibly carving out pro career.

Playing in Virginia Tech’s four-out system, nearly 66 percent of Bibbs’ field goal attempts in the half-court this season were jump shots, per Synergy. The southpaw, who has a quick release, was 67-of-165 (40.6 FG%) on jumpers this season (57 eFG%) — 1.14 points per possession. That ranks No. 8 amongst ACC player that attempted at least 100 jumpers this season, according to Synergy.

As a junior, Mahmoud blocked 12.6 percent of opponent two-point field goal attempts while on the floor (580 minutes), which ranked in the 100th percentile. The 7-footer followed that up as a senior, too: with a 12.2 percent block rate in 841 minutes.

This makes Mahmoud — dating back to the 2009-10 season — the only ACC player to have multiple seasons of 500+ minutes and a block rate north of 12 percent, per Sports Reference.

According to Synergy, opponents shot under 29 percent on non-post-up possessions at the basket defended by Mahmoud.

Another big fella, another prolific shot blocker: Ben Lammers. With Lammers, though, let’s check out the other end of the floor.

The Lamminator battled injuries this season, which sapped him of some of his play-making verve and finishing on offense. In 2016-17, Lammers finished second in the ACC with 50 dunks; a year later, Lammers dropped to just 13 slams on the season.

Despite missing some of his explosion at the rim, Lammers was still efficient around the basket — shooting 64 percnet and scoring 1.34 points per possession, according to Synergy.

With most of his attempts coming around the basket (93 percent), Geben shot above 60 percent from the floor. NBA teams could find themselves interested in Geben because of his ability to play screen-roll and basketball — a valuable piece to any offense. Geben isn’t a quick leaper, but he can carve out space and is powerful attacking the rim; this has always been an underutilized plus skill for the 6-foot-9 center.

According to Synergy, Geben shot 72.2 percent as a roller this season and scored 1.29 points per possession. Amongst Division I players with at least 50 possessions, that ranks 12th in the nation and No. 1 in the ACC.

Despite dealing with his own injury concerns, Farrell put together another productive season in the backcourt for the Irish.

For the second straight season, Farrell impressed as one of the top pick-and-roll scorers in the nation. According to Synergy Sports: 39.8 percent of Farrell’s possessions this season came as a pick-and-roll ball handler — tops in the ACC, just ahead of Markell Johnson.

Of the 55 Division I players that used at least 200 pick-and-roll possessions this season, Farrell ranks sixth with an effective shooting rate of 53.7 percent.

3 reasons why Oshae Brissett is so valuable to Syracuse Basketball