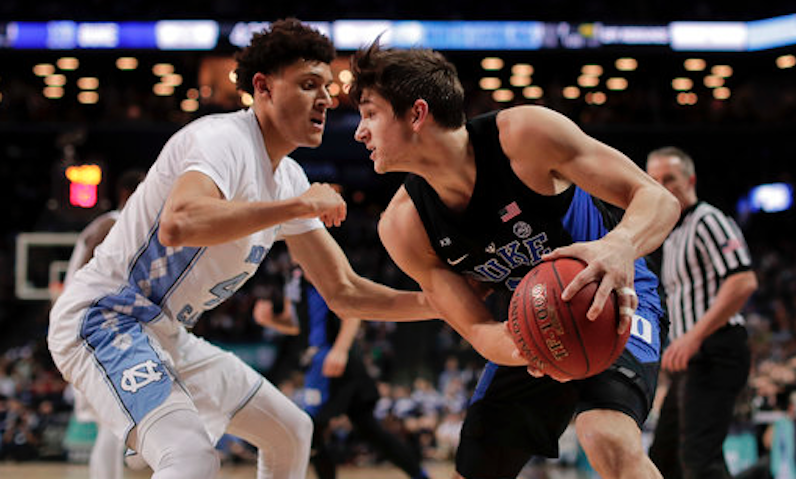 Duke basketball approaches the 2017-18 season with an interesting roster. Turnover was high in Durham. Luke Kennard, Jayson Tatum, Harry Giles and Frank Jackson are headed to the NBA Draft. Seniors Amile Jefferson and Matt Jones completed their careers. Chase Jeter decided to transfer to Arizona. Even the most experienced player on Duke’s roster — Grayson Allen — is somewhat of a wildcard.

To the surprise of some, Grayson Allen decided to return for his senior season. Which raises the question: how good can Grayson Allen be for the Blue Devils? If you’re a fan of Duke, there are several reasons to feel confident that the All-ACC-level Allen shows back up next season.

Get back to the mean

Grayson Allen was predicted to be the best player in the ACC last season. That, uh, didn’t exactly happen. Allen saw just about every box score metric dip. He played fewer minutes, scored less (despite attempting a larger percentage of three-pointers) and saw his shooting nosedive. Allen’s offensive rating on KenPom dropped by over 11 points per 100 possessions, too.

There’s a lot of data out there that demonstrates how proficient of a shooter Grayson Allen has been during his career.

In 2016-17, however, Allen finished the season under 40 percent shooting from the field. Allen connected on less than 45 percent of his two-point attempts.

Allen’s most noticeable drop occurred in transition. According to Synergy Sports, Allen scored 1.39 points per possession (63 FG%) in transition as a sophomore (2015-16). He ranked No. 4 nationally in offensive efficiency in transition amongst players with at least 100 possessions.

This past season, though, those numbers dropped, significantly: 0.944 points per possession, 43.1 percent shooting, according to Synergy. The ACC featured 36 players that used at least 70 possessions in transition this season; Allen ranked 33rd amongst this group in offensive efficiency. Allen turned the ball over more frequently, too: 18.1 percent in 2017 — compared to 8.8 percent in 2016.

This won’t continue. Allen is an explosive athlete; he can also handle the ball and splash jumpers. Grayson Allen will find his form again on the run this season.

The game of basketball is in constant evolution; it’s one of the things that makes it so interesting. No matter how much the game changes, though, the point guard position reigns supremely important. The last two seasons, Allen has had to spent a lot of time handling the ball, running Duke’s offense.

As a sophomore, Allen and Brandon Ingram formed a potent two-headed pick-and-roll monster. They took turns running Duke’s motion attack, and it worked.

This season, Allen and Frank Jackson took turns acting as Duke’s de facto point guard. That’s all about to change, though.

Five-star point guard Trevon Duval is by all accounts a stud. He’s billed as a true point guard — a player that can come in, play big minutes and run the show. This is a serious boon for Allen, who is one of the best spot-up players in college basketball — period.

Over his three-year career in Durham, Allen has scored 463 points on 383 spot-up possessions — 1.21 points per possession. To do this, he’s connected on 148-of-332 spot-up attempts (44.6 percent). Both of those numbers are absolutely smoking.

Duval will allow Allen to hunt jumpers off the ball, and the two guards should form a nice two-game battery.

A big part of Allen’s struggles last season was an ankle injury the nagged him for a chunk of the year. Allen wasn’t as explosive or laterally quick. The cost was obvious, including a seven-game stretch towards the end of the season when Allen averaged 6.9 points on 24 percent shooting.

It wasn’t just the ankle injury, though. Allen missed time early in the season due to a toe injury as well.

Allen did manage to heat back up at the end of the season; over Duke’s final five games, Allen averaged 17.4 points, 3.2 assists and shot nearly 49 percent from downtown.

Now, with an offseason to recuperate, Allen should be healthy and ready for one final campaign through the ACC.