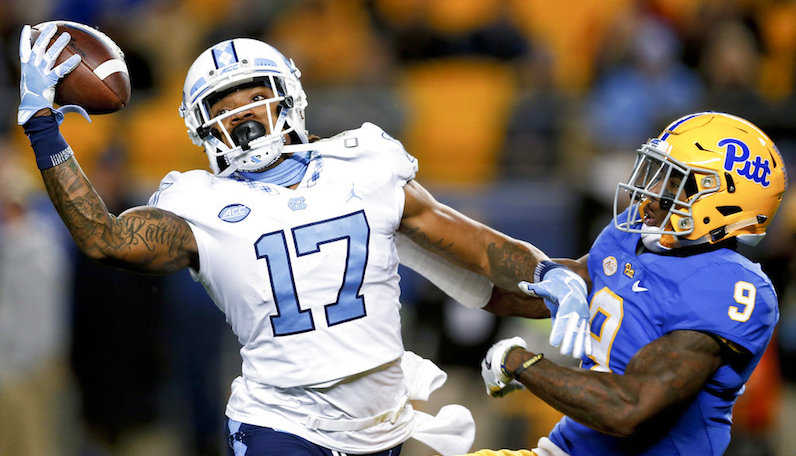 North Carolina football bagged its first ACC and FBS win of the 2017 season on Thursday night at Pittsburgh. The star of the evening, unquestionably, was all-purpose weapon and sophomore receiver Anthony Ratliff-Williams.

Now, this wasn’t the first time this season Ratliff-Williams had a big game — his performance against Duke still sticks out, too. But it’s worth running back through a historical night.

Inside the Ketchup Bottle

Ratliff-Williams put forth a unique effort against the Panthers. The sophomore hauled in five passes for 75 yards and a touchdown; threw a 35-yard touchdown to Josh Cabrera; and took the opening kickoff back to the house, a 95-yard touchdown,

Against Pitt, Ratliff-Williams caught all five of the passes he was targeted on, including a three-yarder from lefty Nathan Elliott that proved to be the game-winner.

For the season now, he’s caught 25 balls (second most on the team) on 47 targets — a catch rate of 53.1 percent. That’s not an amazing rate; however, once you factor in the vertical nature of his routes and the quarterback carousel at UNC in 2017, and it starts to look pretty good. In 2018, don’t be surprised if that number gets on the good side of 60 percent.

Just the start of something

Anthony Ratliff-Williams is also the only player in the FBS right now with at least 400 yards receiving and 700 yards on kick returns.

The More the Merrier: Will that be the case for Cameron Johnson and UNC?