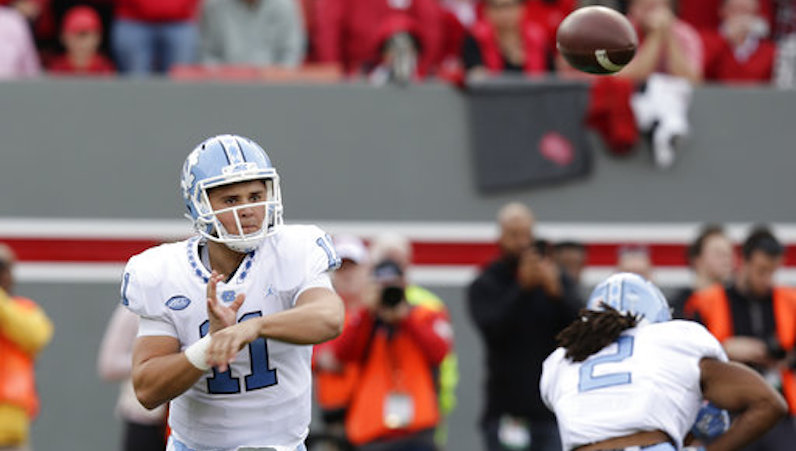 When Chazz Surratt was named as one of 13 UNC football players to serve a suspension for selling university-licensed shoes, it became clear: Nathan Elliott would get the starting quarterback nod for North Carolina. Surratt is suspended for the first four games of the season, which means Elliott will get a good shot to lock down the job.

Let’s take a quick run through the numbers, and see why Elliott should inspire some confidence in UNC fans.

In the 2017 season, Nathan Elliott completed 75-of-146 pass attempts (51.4) for 925 yards and 10 touchdowns — to five interceptions. Over the final four games of the season, with Elliott as the starter, including the road win at Pittsburgh (20-of-31, 235 yards, two touchdowns), Elliott attempted nearly 36 passes per game (52.4 percent completion rate).

As ESPN’s David Hale points out, Elliott — without too much context — put up some interesting numbers, stacked up against Ryan Finley of NC State.

What if I told you that Player A will be UNC’s starting QB this year, and Player B will be NC State’s… pic.twitter.com/WGNmcCURp9

A few numbers in that chart jump out for Elliott, but let’s focus on the last one: over 26 percent of Elliott’s plays went for 10-plus yards. Elliott’s completion rate is fairly middling, but we was explosive, and rarely off target, according to Hale.

Elliott also did a slightly better job avoiding the pass rush, too. Surratt was sacked on 7.1 percent of his drop-backs, per Football Study Hall. For Elliott, that number was 5.8 percent.

When Elliott did struggled in that final quartet of games, it came against the elite pass rushes of Miami and NC State.

The breakout star for North Carolina on offense in 2017 was do-it-all receiver/returner — and former prep quarterback — Anthony Ratliff-Williams. UNC has a nice backfield combination with Jordon Brown and Michael Carter, but for the Tar Heels to max out on offense, ARW has to excel.

Over the final four games, with Nathan Elliott taking the vast majority of snaps, Ratliff-Williams was targeted 27 times: 17 receptions (63 percent catch rate) for 319 yards and three touchdowns. In the wins over Pitt and Western Carolina, ARW caught all 10 of his targets: 163 yards and two touchdowns.

In this span of games, Surratt was just 3-of-5 through the air for 81 yards; however, all of his attempts went to receivers other than Ratliff-Williams. Elliott was responsible for all 27 of ARW’s targets. In terms of continuity, that could bode well for the Heels to start off in 2018.