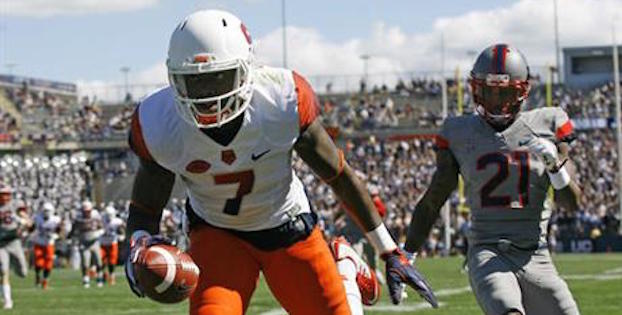 Amba Etta-Tawo is putting together an All-ACC season for Syracuse. (AP Photo).

Syracuse’s loss to Wake Forest last Saturday included something that previously hadn’t occurred this season: Amba Etta-Tawo was held to under 100 yards receiving. In the first five games of the season, Etta-Tawo had at least seven reception and 103 yards in every game; however, the Demon Deacons held the Maryland-transfer in check — five targets, four receptions and 36 yards. It was also just the second game all season when Etta-Tawo was kept out of the end zone.

Despite being stymied by Wake Forest, Etta-Tawo has been one of the best receivers in all of America; in fact, he leads the nation in receiving yardage. The single season record for yards by a Syracuse receiver is 1,131, which was obtained by Marvin Harrison — the school’s all-time leading receiver — back in 1995. That number is well within reach for Etta-Tawo, who has racked up 876 yards through the air in their first six games, which is already the ninth most in a single season at the school.

To find out every ACC team’s top perimeter playmaker for free, sign up for basic access to ACCSports.com.