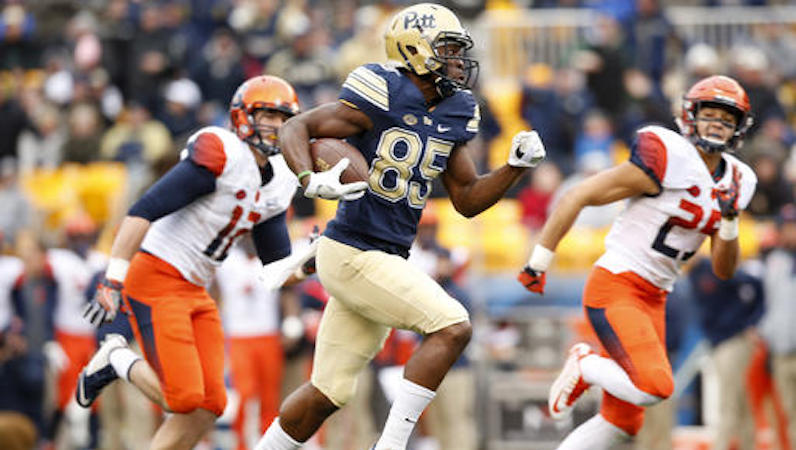 Pittsburgh wide receiver Jester Weah (85) runs with the ball after catching a pass on his way to a 59-yard touchdown against Syracuse during the first half of an NCAA college football game in Pittsburgh, Saturday, Nov. 26, 2016.(AP Photo)

As the only wide receiver with any significant experience heading into the 2016 season, big things were expected of Dontez Ford. Injuries complicated matters, but Ford’s senior season was a challenge. Pitt football had to look elsewhere for answers, and the Panthers found just that.

Quadree Henderson — a jack of all trades — morphed into one of the country’s top big-play threats. On the other side of the pitch, Jester Weah broke out in spectacular fashion and became one of the true downfield menaces of the ACC. Both players return and will team up with new quarterback Max Browne — a USC transfer. That should give Pitt football an intriguing passing attack on offense.

Here’s more on the unheralded Weah.

Go up and get it

Weah is in the mold of the archetypal tall receiver; the 6-3 pass-catcher doesn’t need much seperation to make a grab. He can ran toe-for-toe with a cornerback and, at the last second, unfurl to snag a pass.

His straight-line speed can be a challenge for defensive backs. Weah routinely made big plays up the sideline or burned defenders on skinny posts over the middle of the field.

According to Football Study Hall, Weah was Pitt’s most targeted receiver last season. Per FSH, nearly 21 percent of the team’s passes (64) were intended for Weah, who hauled in 56.2 percent of those balls (37). Weah led the team with an average of 13.6 yards per target, too.

Weah led the ACC in yards per catch (24.2). He and Jaylen Smith of Louisville were the only players to average better than 20 yards per reception. For the season: 13 of Weah’s 36 receptions (36.1 percent) went for 25-plus yards, according to cfbstats.com.

This is rather impressive production, especially when you factor in how little he was used in 2015. That season, Weah was targeted only five times and didn’t record a single reception.

When in doubt, throw it to Weah

Only three players in the ACC last season caught 10 or more touchdown passes: Amba Etta-Tawo, Mike Williams and Weah. Williams and Etta-Tawo were targeted a combined 271 times last season, per Football Study Hall, while Weah was targeted on just 64 plays.

Nearly one-third (10) of Weah’s 36 receptions went for scores. Weah and Clemson’s Deon Cain were the only two players in the conference to record at least seven touchdown receptions on fewer than 40 total catches.

Weah’s height and versatility allow him to be a threat closer to the goal posts; he doesn’t need a lot of space to do damage. According to NCAAsavant, Weah caught 60 percent of the passes thrown his direction inside the red zone, including three that went for touchdowns.