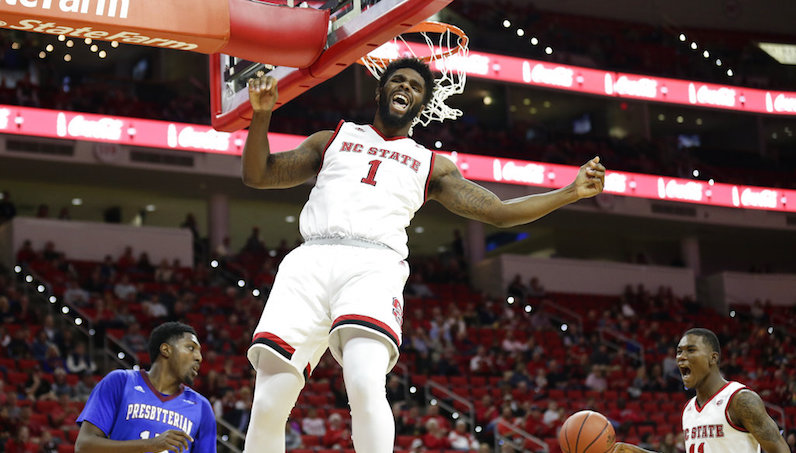 It’s been a bit jarring this season to watch NC State basketball, look out at the court and see all five guy on defense playing incredibly hard. This isn’t a dig at Mark Gottfried; however, it’s obvious that Kevin Keatts has gotten his team to buy in on the defensive end.

The Wolfpack lack a true bucket-getter — someone you can throw the ball to at leverage moments, and expect some points. Offense may be tough to come by at times in Raleigh this season, but NC State will guard the entire court and play with intensity.

It helps Keatts that the most experienced player on his roster — Lennard Freeman — is emptying the tank on both ends of the floor. If a guy like Freeman commits to a new process, it’s easier for everyone else to follow suit. This isn’t speaking exclusively in intangibles, either. Lennard Freeman, who got in incredible shape before the season started, is also playing the best basketball of his career.

NC State has run a bit of a gauntlet to start the season — nine games over 19 days, including matchups with Arizona, Tennessee and Penn State. Over this stretch, Lennard Freeman has been the Pack’s most impactful player. He’s averaging 12.3 points (3.6 points per game in his first three seasons), and his usage rate has climbed to 17.2 percent, per Sports Reference.

Over 17 percent of NC State’s possessions have ended with Freeman shooting, getting fouled while shooting or turning the ball over. That’s actually not a huge number, although it’s a major increase over his career usage rate: 10.7 percent.

It should be noted — Freeman rarely turns the ball over: 5.4 percent turnover rate, No. 33 in the nation according to KenPom. Instead, Freeman is scoring efficiently at the hoop and drawing a lot of fouls. In fact, Freeman has drawn 5.7 fouls per 40 minutes, in the first nine games of the season.

At the end of the day: Get Buckets

Last year at UNC Wilmington, Kevin Keatts ran one of the nation’s top pick-and-roll offenses. Now in Raleigh, Freeman has transitioned into the center of that attack. Freeman is scoring 1.36 points per possession as a roller out of the pick-and-roll — a top 30 number in Division I basketball — and has drawn a shooting foul on 28.6 percent of these possessions (No. 12 in the nation), per Synergy Sports.

Freeman has been wildly effective out of the post, too. According to Synergy, Freeman has scored 1.39 points per possession on post-ups (69.2 percent shooting); that ranks No. 1 in the ACC — ahead of even Marvin Bagley — and No. 9 in the nation.

Even when NC State doesn’t run action to get him a look, Freeman can fall back on old habits: crash the glass. Freeman has collected nearly 10 percent of his team’s available misses while on the floor this season. On put-back attempts following an offensive board, Freeman has scored 80 percent of the time — 8-of-10 shooting, 1.6 points per possession.

This is why Freeman leads the ACC in offensive rating (159 points per 100 possessions), ranks second in player efficiency rating (33.1, behind Bonzie Colson) and third in true shooting rate (75.2 percent).

All of this production is wildly valuable, especially with Abdul-Malik Abu on the mend. In 2016-17 at UNC Wilmington, Keatts helped make Devontae Cacok into a star. That may be happening with Lennard Freeman at NC State now.