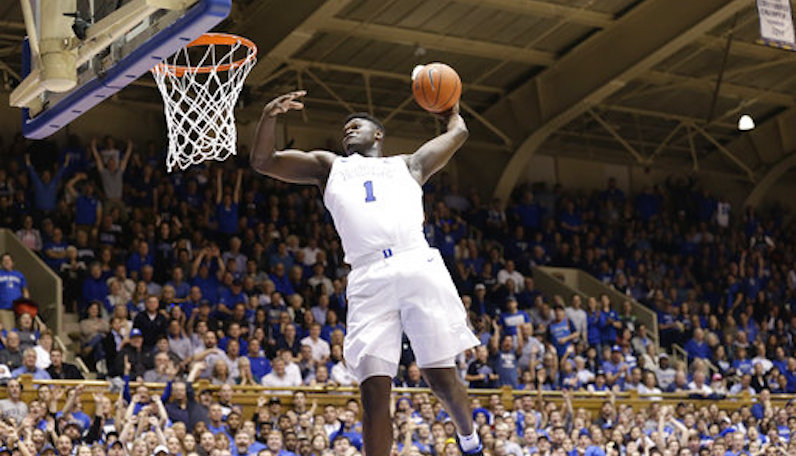 Duke's Zion Williamson (1) drives for a dunk against Clemson during the second half of an NCAA college basketball game in Durham, N.C., Saturday, Jan. 5, 2019. (AP Photo/Gerry Broome)

The opening week for conference play was a bit of a blur. That was a lot of basketball. To help sort things, let’s go through the league in this week’s ACC Basketball Power Rankings. Once again, also, Zion Williamson did more Zion Williamson things. Jump on it; spin around if you feel like it, too.

Despite a quiet offensive game from De’Andre Hunter (2-8 FGA, only one 3PA), who is in a bit of a mini-slump, Virginia still picked up its best win of the season: 65-52 over Florida State. The start of the show was Kyle Guy: 21 points, five more three-pointers. For the season, Guy has scored 1.32 points per possession (64.7 eFG%) on half-court catch-and-shoots — No. 10 nationally amongst player with at least 70 possessions. Just look at this release; the quick rhythm and balance is ridiculous.

Duke’s defense is doing just so many things well right now. Opponents are shooting a measly 41.9 percent from inside the arc against the Blue Devils (47.2 FG% at the rim); less than 35 percent of opponent field goal attempts have been of the three-point variety, too. According to Synergy Sports, Duke’s man-to-man defense has allowed 0.73 points per possession (42.4 eFG%) in the half court, which ranks 10th nationally, per Synergy.

In the win over Boston College, Virginia Tech struggled from deep: 6-of-22 (27.3 3P%), the team’s second worst outing so far this season. However, the Hokies got up 25 free throw attempts — making 21 — and shot efficiently from inside the arc, led by Nickeil Alexander-Walker and Kerry Blackshear: 19-32 (59.4 2P%). For the season, both of those guys are shooting over 59 percent on two-point attempts.

In the half court, Alexander-Walker is shooting 59.6 percent at the rim — 1.35 points per possession — but he’s also one of the better steals/blocks guys in the ACC, too, which can lead to instant offense.

White still had a few too many turnovers — five more, 4.3 per 40 minutes now on the season — but there’s just so much to like with his offensive game. He hit a few catch-and-shoot three-pointers, which opened up driving lanes for that ultra-quick first step of his.

UNC is up to No. 6 overall in KenPom’s efficiency ratings, and is set up for a big matchup with You Know Who this week.

When NC State took down UNC in Chapel Hill last season, it was behind a dominant pick-and-roll performance from Markell Johnson, one of the nation’s top screen-roll decision-makers. In that victory, Kevin Keatts and Johnson targeted Luke Maye on 1-5 switches; can the Pack find that favorable matchup again? If Sterling Manley can’t play, will the Heels play smaller?

In the previous 20 matchups, UNC won 16. In YP form .. pic.twitter.com/aFDWtQ8zpG

Regardless, NC State has scored 1.12 points per possession (63.9 eFG%) when Johnson has used or been a passer out of pick-and-roll this season, according to Synergy. That ranks No. 6 nationally (minimum 100 possessions).

So, things got a little out of hand for FSU at Virginia on Saturday. During the middle 20 minutes of the game, UVA outscored the road team 40-21. Florida State simply couldn’t recover from that backslide, especially as it coincided with a 6-of-23 shooting performance from deep (26.1 3P%). FSU returns home this week, but things remain tough: Miami (Wednesday) and Duke (Saturday).

Can transfer Elijah Hughes be the spacing agent that Syracuse desperately needs? In the 72-62 win over Notre Dame, Hughes (1.2 points per possession on spot-ups) went 6-of-13 on three-pointers. Those 13 attempts were the most for a Syracuse player since Andrew White III got up 14 against Louisville nearly two full years ago.

Man, this Louisville team is kinda fun, right? The Cards were excellent offensively in the ACC opener against Miami — 1.32 points per possession, 13 three-pointers (including three more from our guy Jordan Nwora) and only seven turnovers (10.3 percent turnover rate).

So far this season, Shelton Mitchell’s shooting continues to slip; currently, he’s down to 28.1 percent on three-pointers (46.8 eFG%). It won’t get any easier, either. Going back to Saturday’s loss at Duke, Clemson is the midst of quite a stretch: five straight games against teams that rank inside the top 25 in adjusted defensive efficiency.

Last week was rough for Hurricanes Hoops: More bad news on the eligibility of Dewan Hernandez and two straight losses — NC State, Louisville — to open ACC play. Sophomore point guard Chris Lykes — 1.06 points per possession out of the pick-and-roll, 63.2 eFG%, per Synergy — has been pretty awesome, though. Lykes is one of six ACC players currently with 25 percent usage rate, 20 percent assist rate and 55 percent true shooting.

Entering this season, veteran wing Jordan Chatman was a career 40-percent three-point shooter (412 3PA). This year, however, has been a struggle for Chatman, who has also dealt with an ankle injury. So far, Chatman sits at just 28 percent from deep (5.6 3PA per 40 minutes), after going 0-of-6 on three-point looks against Virginia Tech. The Eagles need Chatman to return to sharpshooter status.

Pitt hung tough at the start against North Carolina, but the Panthers could just never get online offensively: 0.79 points per possession (10.5 3p%). It’s been a nice season so far for Jeff Capel and Pitt; however, the next eight games come against teams that currently exist inside the top 40 of KenPom’s efficiency ranking. Buckle up, baby.

He’s played in only a baker’s dozen of games, but James Banks has already established himself as one of the ACC’s premier shot-blockers: 3.7 per 40 minutes. Wake Forest victory notwithstanding, Tech will have to win with its defense this season; Banks is ready to anchor that unit.

Georgia Tech currently ranks outside the top 200 nationally in adjusted offensive efficiency. This is Johs Pastner’s third season with Tech and, according to KenPom’s database, the Yellow Jackets have scored over 1.2 points per possession just five times in that stretch. Unfortunately for Wake Forest, which has never been able to defend under Danny Manning, one of those five occurrences came on Saturday — when the Demon Deacons gave up 92 points and allowed Tech to shoot 72 percent from inside the arc.

Those 5 teams represent 5 of Jeff Bzdelik's last 7 wins at Wake, with 3 of them coming in the last month of his tenure. Beat all 5 in his final season

Inside The Playbook: How UNC creates open looks for Cameron Johnson and Luke Maye