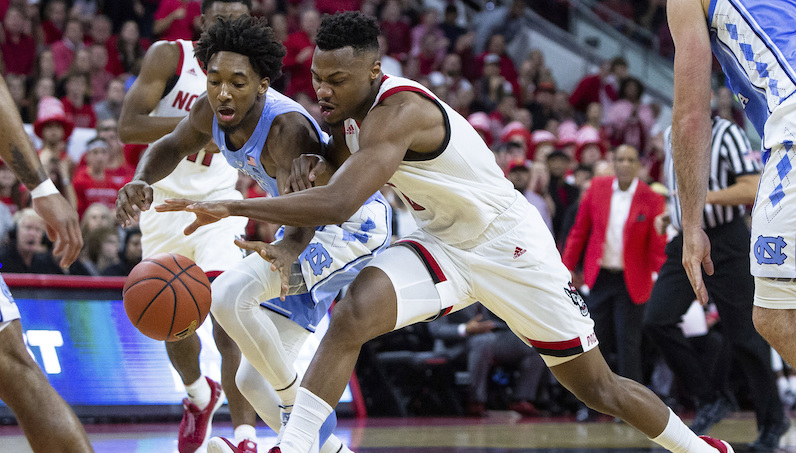 This make the first 2019 installment of a series we started up last season: ACC Bracketology, One Number to Know. The concept is simple; we take the ACC basketball teams currently projected to make the NCAA Tournament — via Bracket Matrix — and offer up one, key number to know for that week. Got it? Good.

In today’s serving, nine ACC teams are projected to land in the tournament, including two one-seeds: Duke and Virginia. That’s one shy from tying the Big Ten with the most at 10. All nine of those team rank inside KenPom’s top 40, too.

Zion Williamson does basically everything well on the basketball floor; he even splashed three 3-pointers in the road win over Wake Forest. Known for his rim finishes and impact plays on defense, Williamson continues to flash a crafty passing game, including a career-high five assists in Winston-Salem (21 percent assist rate).

Then this look to Barrett, right at the start of the game, is just perfect for him with regards to the NBA. Attacks a spread floor, draws an extra defender with his drive and knows exactly where his corner shooter is located.

For just the second time under Tony Bennett, and the first time since the 2010-11 season, Virginia is shooting 3-pointers at a higher volume than its opponents. With Kyle Guy (61.8 eFG% off screens, per Synergy) and Ty Jerome (58.6 eFG% off screens) — two of the best movement range shooters in the country — running around, 38.7 percent of Virginia’s field goals have come from beyond the arc. For opponents, that numbers sits 37.1 percent.

Another look at the two-man game of De'Andre Hunter and Kyle Guy, and the pressure @UVAMensHoops can put on opponents by involving those two together, via @bgeis_bird https://t.co/TNen4KFxH2 pic.twitter.com/0s4NTIxPDJ

In its up-and-down road victory over NC State in Raleigh, UNC defended rather well. Previously, the Tar Heels have had issues against Markell Johnson in ball-screen offense — most notably with the speedy guard attacking Luke Maye on switches. That, however, wasn’t the case Tuesday night; North Carolina mostly avoided switches, and received a yeoman effort from Garrison Brooks.

Earlier this week, I posted a big feature (make sure to check that out) on Virginia Tech’s wildly efficient and balanced offense. The Hokies are becoming known for small-ball and range shooting; however, there’s an interior element to the offense, too, thanks to Kerry Blackshear Jr. and P.J. Horne.

According to Synergy, those two are are a combined 39-of-56 on post-up attempts (69.6 FG%) and have each scored over 1.22 points per possession. Tech’s post-up offense ranks No. 1 in the nation in efficiency.

Blackshear, who can roll and pop, is the far better option out of the screen-roll/pop game (1.1 points per possession), but Horne (68.1 2P%) is currently one of the top reserve post players in the ACC.

Duke awaits on Saturday, but after that, FSU may find some room to breathe.

For the first time this season, NC State struggled offensively; against UNC, the Pack scored 0.96 points per possession, easily the lowest of the 2018-19 campaign. State’s bench, however, provided a serious offensive spark. Braxton Beverly (42.1 3P%), D.J. Funderburk (69 2P% this season) and Jericole Hellems combined for 43 points on 29 field goal attempts.

No player in the ACC has seen a bigger jump in his scoring average than Jordan Nwora — 17.9 points per game (12.3 FGA), up from 5.7 last season. You could see it coming after last season — Nwora had game and scoring versatility; he just needed a larger platform. Nwora’s usage rate has jumped from 21.9 percent in 2017-18 (not exactly a low rate, by the way) to 26.8 percent this season. He’s also attempted 23.5 field goals per 100 possessions, too — up from 19.1 last season.

In recent games, Syracuse has shown some improvement offensively — three straight games over 1.08 points per possession. Of course, all of that came against defenses that rank outside of the top 90 in terms of adjusted defensive efficiency, including Notre Dame.

This team will once again butter its bread with defense. Syracuse’s zone has allowed a stingy 0.75 points per possession (44.2 eFG%) so far this season, which is excellent. Next up — two offenses that really struggled to shoot from deep, too: Clemson (32 3P%) and Georgia Tech (30.5 3P%).

Also, this is cool, too.

Something pretty awesome happened for someone in our program tonight at our team meeting. Someone that completely embodies #ClemsonGRIT and #TigerPride…

How do you stop what you can’t get to? Virginia Tech puts all kinds of pressure on opposing defenses