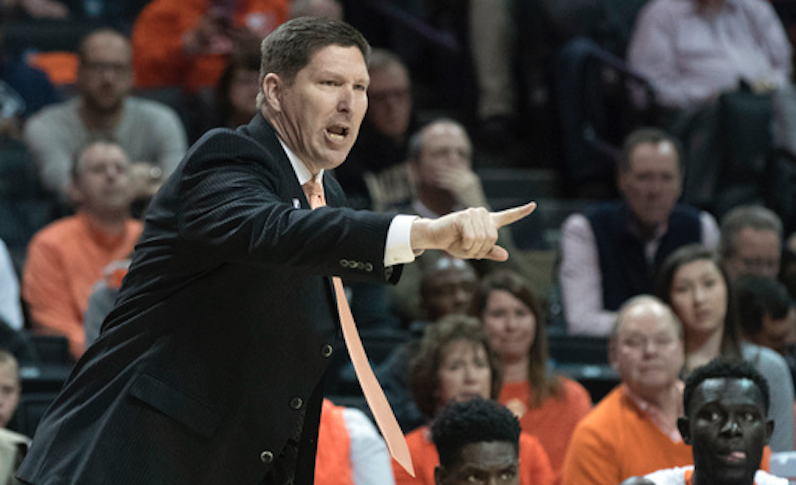 Brad Brownell has Clemson in the NCAA Tournament for the second time in his tenure. (AP Photo)

The Tigers did not actually shoot that well from distance in Clemson’s opening-round victory over NC State in the ACC Tournament. Shelton Mitchell connected on three of his five attempts from beyond the arc, but as a team, Clemson was just 7-of-21 on three-pointers.

However, those threes were critical in burying NC State, and several came off of pick-and-roll action. Clemson would run a high ball screen, and as Sidy Djitte and Elijah Thomas rolled to the rim, NC State would send help from the weak side to bump the cutting big man. The Tigers would then whip the ball to the corner where the help defender came from for an opportunistic catch-and-shoot three-pointer; this is what good floor balance will do for an offense.

Clemson has six rotation players who attempt more than two three-pointers per game; three of those guys — Shelton Mitchell, Avry Holmes and Marcquise Reed — shoot better than 41 percent from distance. All three of those players shoot 40 percent or better on spot-ups, too, per Synergy Sports.

Duke, to its credit, has done well defending spot-up opportunities this season. According to Synergy, opponents have shot just 33.8 percent on spot-ups, which ranks No. 10 in the nation. The Blue Devils, however, have had issues on defense. No one is sneezing at a unit that ranks 38th nationally in defensive efficiency, per KenPom.com, but Duke’s title teams in 2010 and 2015 both ranked inside the top 12.

Part of the problem, if you want to call it that: Mike Krzyzewski’s squad has had issues defending pick-and-rolls and cutters. That could be an opportunity for the Tigers.

Duke allows 0.78 points per possession on pick-and-rolls, per Synergy, which ranks 219th in the nation. The Blue Devils have a tendency to commit fouls on that action: 11.3 percent of the 379 pick-and-roll possessions Duke has defended have resulted in a shooting foul.

Avry Holmes injured his left ankle in the win over NC State; his health status will be a serious factor for Clemson if the Tigers want to pull off an upset. Holmes is Clemson’s second-best shooter out of the pick-and-roll — 43.9 percent, according to Synergy. When he turns passer, the Tigers score 0.95 points per possession when he helps create a spot-up opportunity.

Clemson has gone 7-3 in games in which the Tigers have shot at least 40 percent on three-pointers this season. If Holmes is healthy, it will be interesting to see what Clemson can accomplish off of pick-and-rolls. If he is able to play, but not at 100 percent, then keep an eye on Reed and especially Mitchell; those two will be counted on even more. Mitchell is Clemson’s team leader in assist rate (24.5 percent), so he is more than capable of carrying the water. Gabe DeVoe will be involved, too.