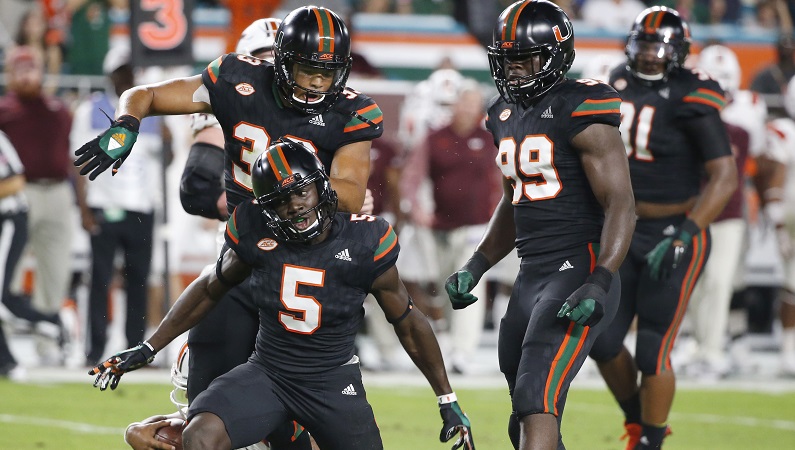 The success of Clemson and Miami this fall has set up an ideal scenario for the ACC in its annual league championship game.

The scenario is a de facto national quarterfinal game, in which the winner is assured a spot in the College Football Playoff semifinals. All Miami has to do is knock off Pittsburgh, and Clemson take down rival South Carolina in their respective regular season finales, and it will be all set.

It’s an enviable position for the ACC to be in. Only the SEC can make the same claim right now among America’s Power 5 conferences.

With Miami returning to national prominence under Mark Richt, on the verge of the program’s first undefeated regular season since 2002, the dream of the ACC’s initial expansion has finally come to fruition.

At the time, it was expected that Miami and Florida State would perennially keep the league positioned to play for national championships. Instead, it was Virginia Tech that assumed the mantle as the ACC Coastal’s dominant team, as Miami’s program struggled to meet expectations for over a decade.

While the recent resurgence of the programs at FSU and Clemson have created numerous national championship opportunities for the ACC, Miami has been left out in the cold. That is, until now.

For Clemson, returning to Charlotte for the third straight December with a national championship opportunity on the line is becoming old hat. The Tigers are beginning to have the feel of an Alabama – consistently playing in the biggest games with the biggest stakes.

From a financial standpoint, the College Football Playoff is a windfall, with the ACC gaining $6 million by having either Clemson or Miami participating. The money goes a long way in the age of Power 5 autonomy in supporting the bottom lines of every ACC athletic department, from Chestnut Hill to Coral Gables.

One school among the trio of Auburn, Alabama, and Georgia will be in the Playoff – whichever one prevails in the SEC Championship Game.

Undefeated Alabama has the clearest path, but will have to knock off the Tigers and Bulldogs to earn their spot. Auburn will sneak in by taking down the Crimson Tide, and then beating UGA a second time. Georgia holds out hope they can stun the Auburn-Alabama winner in Atlanta. But first, they have to avoid getting upset by faltering Georgia Tech.

Oklahoma will in if they defeat West Virginia, and then beat TCU in a probable rematch in the rebirth of the Big 12 Championship Game Dec. 2. Wisconsin will play their way in if they beat Minnesota, and then Ohio State in the Big Ten title game. But if Oklahoma or Wisconsin, or both, lose in the next two weeks, it will throw a monkey wrench of chaos into the CFP process.

The Power 5 conference on the outside looking in is the Pac-12. Southern Cal is positioned to win the league at 10-2. But the Trojans were clobbered by Notre Dame in South Bend, and also lost a road game at Washington State. Even if Oklahoma and Wisconsin get knocked off, schools such as Ohio State, Notre Dame, or the trio of SEC schools still in contention, have better profiles for the CFP this fall than Southern Cal.

Fortunately for the folks in Greensboro running the ACC, those are not their problems. At least not this year.