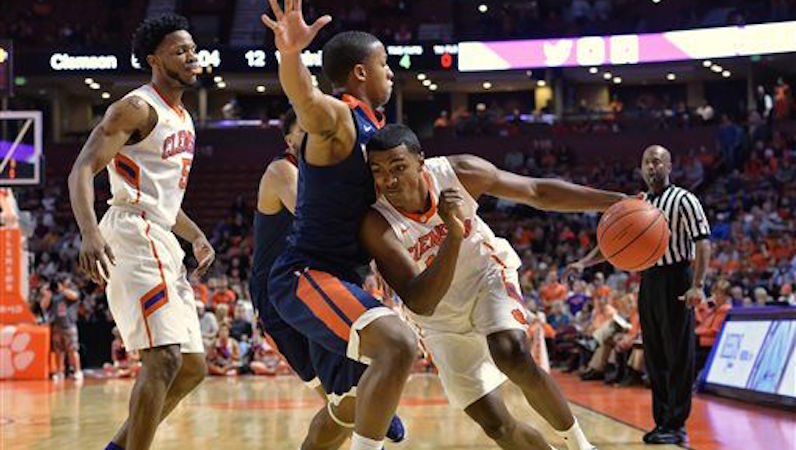 As Jaron Blossomgame transitions to life in basketball’s professional ranks, Clemson is left with the task of replacing his production. That won’t be easy, obviously, and it may not be possible; for the last three seasons, Blossomgame wore a lot of different hats for the Tigers. The closest facsimile on Clemson’s roster, however, is senior forward Donte Grantham.

Grantham flirted with the idea of going pro, too, but decided to stick at Clemson for his senior season. That’s a major boon for coach Brad Brownell. Clemson flushed Brownell with a monster six-year extension back in April, which was a surprise to some.

The Tigers haven’t won 20-plus games in a season since 2013-14. Clemson has gone to just one NCAA Tournament under Brownell, too. That occurred back in 2011 — Brownell’s first season with the program.

However, if Donte Grantham can find another gear, Clemson is positioned to do some damage in 2018.

The vast majority of Clemson’s power forward minutes this season were split between Blossomgame and Grantham — two rangy athletes. This allowed Clemson to play four-around-one with Sidy Djitte or the super-underrated Elijah Thomas in the middle.

Thomas has to have a monster season in the post for Clemson next year. You should be bullish on this notion if you’re a Clemson fan, too. According to Synergy Sports, Thomas shot 52.2 percent on post-ups in 2016-17. This ranked No. 3 in the ACC — behind only Michael Young and John Collins, the No. 19 pick in the NBA Draft.

However, for Thomas to have optimal space in the paint, though, Grantham has to at times be functional has a hybrid-4. Grantham has the floor game to make that work; he was the lone frontcourt player on the roster this season to post an assist rate of at least 10 percent, per KenPom.

Can he find relocate his shooting touch?

Grantham was a solid three-point shooter his sophomore season. That year, Grantham launched 5.1 triples per game; over 56 percent of his attempts from the floor that season were of the three-point variety. Grantham drilled a respectable 35.4 percent of those attempts, too.

A good start for Grantham would be to start knocking down catch-and-shoot attempts, again. Like Blossomgame, too, Grantham slugged from deep.

In the 2015-16 season, Grantham ranked No. 15 in the ACC (minimum of 90 possessions) in points per possession on catch-and-shoots (1.12). That was a total better than Trevor Cooney, Steve Vasturia and Luke Kennard.

This season, though, Grantham slipped to 30th in the ACC in points per possession on catch-and-shoot attempts.

Maybe this is asking for a lot; Grantham is a career 38.1 percent shooter. There’s a lot of data — 95 games — to suggest that he’s not a plus-shooter. For this to work, that number needs to get north of 40 percent this season.

The addition of Michigan graduate transfer Mark Donnal adds a shooter to Clemson’s frontcourt. He could prove to be a spacing agent around Thomas post-ups, too. This would allow Grantham to move to the small forward position; the Tigers could throw a lot of size out at opponents. Clemson — with Shelton Mitchell and Marcquise Reed — has serious firepower at the guard positions.

For the first time since Brownell arrived at Clemson, the Tigers finished outside the top 65 nationally in defensive efficiency, according to KenPom. That can’t happen again.

Without Blossomgame, Donte Grantham is now the best athlete on Clemson’s roster. The Tigers will need Grantham to check top options from other teams, and hit the glass when slotted as the team’s nominal four.

Clemson football: Where are the Tigers falling in early polls?