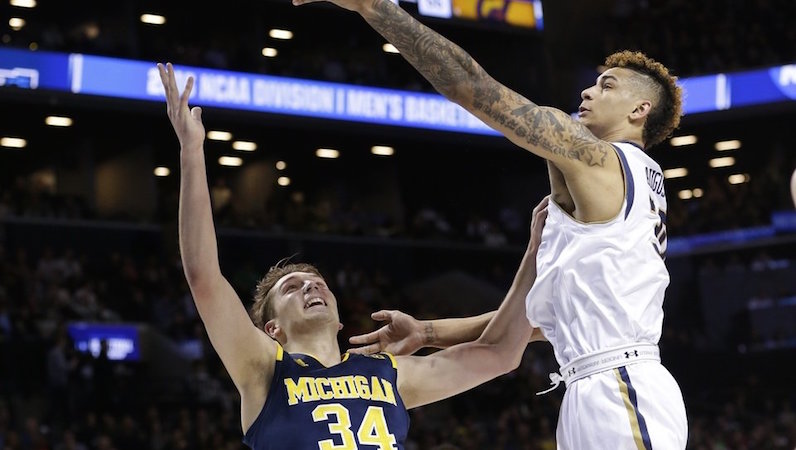 Notre Dame's Zach Auguste (30) and Michigan's Mark Donnal (34) fight for the ball during the first half of a first-round men's college basketball game in the NCAA Tournament. (AP Photo)

Donnal’s box score stats will not blow anyone’s mind. As a junior, Donnal averaged 3.9 points and two rebounds per game. He played just over 12 minutes per game, too. Donnal was essentially out of the rotation by the end of the season. When Moritz Wagner sat, Michigan downsized and played D.J. Wilson as a small-ball center.

However, if we dig a little deeper, we find a versatile and skilled big who can add something to Clemson’s frontcourt rotation.

A pick-and-roll surrounded by plus-shooting is one of basketball’s best offensive plays. It is simple but gets guys going to the basket, and most importantly, it forces a defense to rotate. Donnal can help with this simplistic action.

According to Synergy Sports, Donnal scored 1.3 points per possession on 75 percent shooting when he screen-and-rolled all the way to the basket in 2016-17. In a limited sample, Donnal ranked fifth in the Big Ten in offensive efficiency in this type of action.

Donnal does not have to roll all the way to the basket, though. He has the ability to pick-and-pop or slip for catch-and-shoots. Donnal shot 38 percent on pick-and-pops this season and scored 1.1 points per possession, per Synergy.

How does he fit?

The Tigers also have a pair of backcourt dynamos — Shelton Mitchell and Marcquise Reed — who know how to run a pick-and-roll. Donnal could run a two-step with either guard. Sidy Djitte, who logged 752 minutes at center for Clemson this past season, scored just 0.82 points per possession on pick-and-rolls and turned the ball over 21.2 percent of the time.

As a junior, Donnal connected on 45 percent of his jump shots, according to Synergy. Donnal could open up space when slotted alongside interior bully Elijah Thomas. Thomas shot 52.2 percent on post-ups this season. That ranked third in the ACC among players with at least 50 post-up possessions.

Clemson ranked 35th nationally in adjusted points per possession this past season. The Tigers must replace Jaron Blossomgame and Avry Holmes — two offensive hubs for Brad Brownell. Donnal will not be a one-to-one replacement for either of those players, but he should be able to enter Brownell’s system and help keep the wheels spinning on offense.