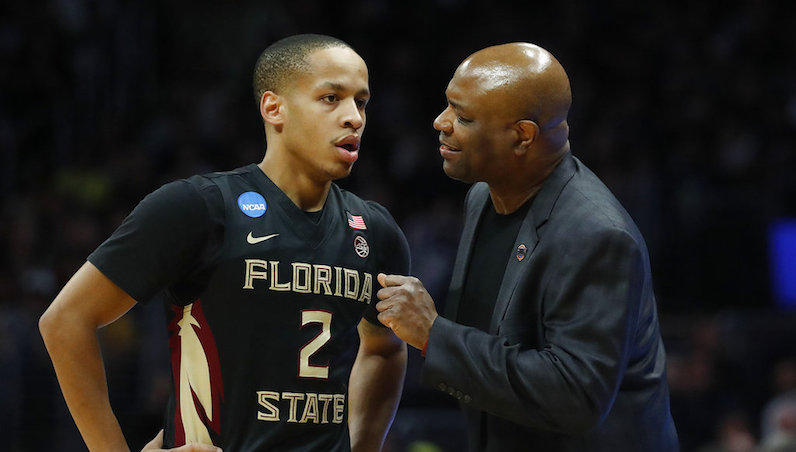 According to Evan Daniels of 247 Sports, sophomore point guard CJ Walker will transfer out from Florida State.

CJ Walker has received his release and will transfer from Florida State, a source tells @247Sports. Averaged 8 PPG & 2.4 APG this season.

After playing a reserve roll behind Xavier Rathan-Mayes in 2016-17, Walker started 34 of 35 games for Florida State this season. The lefty averaged eight points and 2.4 assists; Walker ranked third on FSU’s roster with an assist rate of 17.9 percent.

A four-star recruit out of Indianapolis, Walker initially chose FSU over Butler, Illinois, Cincinnati and Purdue.

Walker was solid for Leonard Hamilton this season; however, as the year drove along, Walker started to lose his handle on the point guard job — to an extent. The sophomore guard played over 57 percent of Florida State’s available minutes in 2017-18. Over the final five games of the season, though, Walker played just 40 percent of the team’s point guard minutes, per KenPom.

As the ACC Analytics page noted last week, combo guard Trent Forrest played some exceptional basketball down the stretch. Forrest started just two games as a sophomore, but in the team’s postseason run, Leonard Hamilton put a great deal of trust in the 6-foot-5 bulldozing guard.

A case can easily be made that it’s his job to lose in Tallahassee next season.

Who will make shots?

Trent Forrest is ready to play big minutes as a top-flight attacking guard in the ACC; but that doesn’t solve another issue for the Seminoles.

Thanks in part to the improvements of seniors Phil Cofer and Braian Angola, Florida State became a solid spot-up offense in 2018. According to Synergy Sports, FSU scored 0.99 points per possession (52.5 eFG%) on spot-ups — which ranked seventh in the ACC, better than Virginia, Duke and Wake Forest.

However, the departure of CJ Walker — coupled with Cofer and Angola — means FSU is out three players that shot above 35 percent on three-pointers — on over 100 attempts. Walker scored 80 points — 1.01 per possession — on spot-ups this season, per Synergy. That’s all pretty good.

Forrest and Terance Mann are both really good attacking guards — powerful finishers around the bucket. However, those two went a combined 16-of-66 (24.2 3P%) from beyond the arc this season. This means, next season, Florida State will need more from PJ Savoy — one of the ACC’s top snipers — and MJ Walker (assuming he returns), a highly-regarded freshman with serious potential that shot just 30 percent on three-pointers in ACC play.