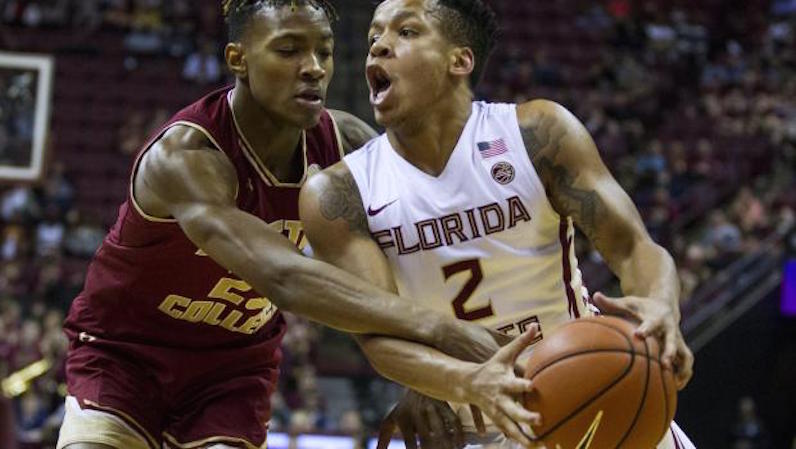 As a sophomore, CJ Walker will get the keys to Florida State's offense (AP Photo)

Florida State basketball returns several key players from a season ago, but it’s hard not to think of this season as a bit of a program reboot.

The Seminoles must also replace their point guard, too: Xavier Rathan-Mayes, a three-year starter. Mann will get his moments at the point, but it’s CJ Walker’s time in Tallahassee.

When it comes to transition offense, few college teams look to run more than Florida State. According to Synergy Sports, 20.6 percent of Florida State’s possessions were used via transition. That was the biggest percentage in the ACC.

Walker was solid in transition as a freshman; he scored 1.14 points per possession on 54.1 percent shooting, per Synergy.

However, Walker’s biggest task will be running Florida State’s halfcourt offense, which means a healthy diet of pick-and-rolls.

Florida State ball-handlers used 10.9 percent of the team’s possessions in pick-and-roll action. That ranked around the middle of the pack in the ACC; in total, FSU guards and forwards used 319 pick-and-roll possessions. Rathan-Mayes and Bacon accounted for 176 of those possessions, combining to score 151 points — 0.86 points per possessions.

According to Synergy Sports, 19 percent of Walker’s used possessions were pick-and-rolls. As a freshman, Walker shot just 30.8 percent on these attempts. He also posted a turnover rate of 17.1 percent. It will be a significant boon for Florida State this season if he can improve as a scorer here.

Walker did, however, excel as a passer out of pick-and-rolls. Florida State scored 1.37 points per possession and shot 60 percent when Walker passed out of a pick-and-roll (27 possessions), per Synergy.

That ranked fourth in efficiency within the ACC amongst players that recorded at least 20 pick-and-roll passer possessions.

Now, it may not be as easy to put up numbers that like again without the likes of Bacon and Isaac to dump the ball to; however, this should inspire some confidence for Florida State fans. CJ Walker looks like he could evolve into an efficient, and higher-usage, floor leader.

0 to 100: Evaluating the performance of unexpected starter James Blackman