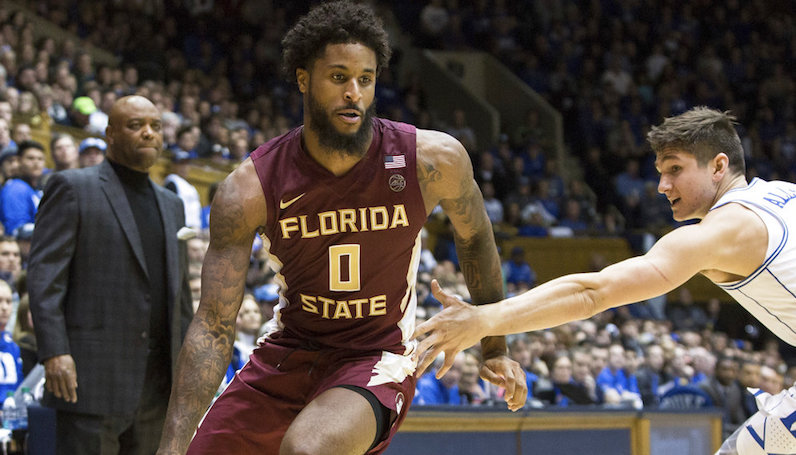 In Phil Cofer’s first three seasons at Florida State, the 6-foot-8 power forward played in 76 games, making 30 starts, and over 1,200 minutes. Cofer would’ve played even more; however, a foot injury in his sophomore season cost him a big chunk of the 2015-16 season.

He made his hay in the paint, predominately. According to Synergy Sports, 25 percent of Cofer’s possessions in 2016-17 were post-ups. This season, however, that number has dipped to 9.6 percent. That’s because Cofer has expanded his game — both literally and metaphorically. It may also be what helps him get a shot in the NBA, too.

We write about this all of the time in this space: the game of basketball has increasingly become a slash-and-kick competition. Rules changes and a greater understanding of the value of a three-pointer have opened the game up; teams want to space the floor with as many shooters as possible, and light up the tower from deep.

That transition started in the NBA, with the G-League as a test lab, and it’s moved to the college ranks, too. Welcome to Moneyball.

According to Synergy, 38.8 percent of Cofer’s possessions this season (12th in the ACC) are spot-ups — up from 20.5 percent in 2016-17. Cofer has scored 1.11 points per possessions (60 percent effective field goal rate), which ranks 17th in the ACC. Luke Maye and Cofer are the only two players in the top 25 of the ACC that are taller than 6-foot-7.

In 2016-17, Cofer scored just 0.79 points per possession on spot-ups, per Synergy. This improvement — over the course of just one offseason — is wildly impressive.

Plus, a stretch-4 like Cofer is the perfect compliment for Terance Mann — a wing that loves to mix it up and get buckets around the hoop.

While Phil Cofer has added the three-ball to his game, the senior forward can still mix it up in the paint, too. Cofer, who averages 10.3 rebounds per 100 possessions, is one of only three ACC players this season to have a defensive rebound rate of at least 10 percent, 25-plus made three-pointers and shot above 50 percent on two-point attempts.

The other two players are two of the ACC’s best — Luke Maye of North Carolina and Clemson’s Donte Grantham. Cofer can still get the job done in the paint.

Cofer is shooting 50 percent on post-up attempts, per Synergy, and is scoring 1.4 points per possession on basket cuts (73.7 FG%).