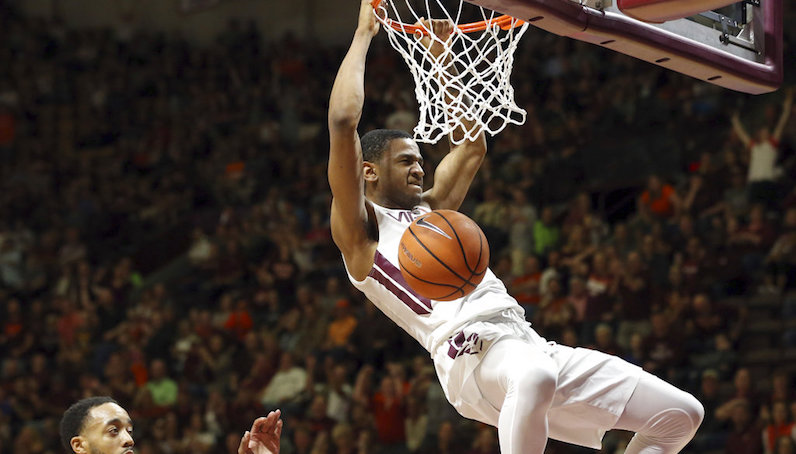 The ACC’s All-Freshman team was announced recently, and it was low on surprises. Marvin Bagley, Wendell Carter were no-brainers; so, too, was Virginia’s stud rookie De’Andre Hunter. Miami’s Lonnie Walker makes sense as well; the only real stretch may belong to Syracuse’s Oshae Brissett, who had a nice season, but fell short of some of his peers.

It would be pretty easy to make a case that Duke’s Gary Trent — a favorite of ours a the ACC Analytics page — deserved inclusion here, too.

Most of those guys will depart for the NBA after this season; Bagley, Carter and Walker are all potential lottery picks. Trent projects as a first-rounder, too.

One ACC freshman that flew under the radar, though, projects to have a big sophomore season in 2017-18. Nickeil Alexander-Walker did not make the All-Freshman team, but the Canadian performed well, and carved out a role as a rookie in Virginia Tech’s crowded wing rotation.

Tdot from the parking lot

Alexander-Walker is one of four Hokies averaging double figures in scoring. This makes him just the 39th ACC freshman since the 1992-93 season to make at least 50 three-pointers in a season and average 10-plus points per game.

According to Sports Reference, Alexander-Walker is one of only 21 Division I rookies to make at least 50 three-pointers, and shoot above 50 percent from inside the arc, too.

Spot-ups are the name of the game for VT’s star freshman; over 37 percent of his possessions this came via spot-ups, according to Synergy Sports. Alexander-Walker is one of the ACC’s best: 41 percent shooting (56.8 eFG%) and 1.09 points per possession — No. 17 in the conference, amongst players with at least 100 possessions.

The 136 total points Alexander-Walker scored on spot-ups ranks 20th in the ACC, per Synergy.

Not just a shooter

Nickeil Alexander-Walker could grow into being a tough defender, too. The Hokies rank 54th nationally in adjusted defensive efficiency, per KenPom, which is the highest rating for Virginia Tech since Buzz Williams arrived in Blacksburg.

Alexander-Walker posted a block rate of 2.6 percent and a steal rate of two percent; according to Sports Reference, he is one of 22 ACC players this season to log 600 minutes, and hit those two benchmarks.

Some of those steals can turn into instant-offense down at the other end, and Alexander-Walker scored an efficient 1.22 points per possession in transition this season.

Virginia Tech should return plenty of firepower in 2018-19; however, the Hokies will also have to replace plenty of minutes on the wing with the departures of Justin Bibbs and Devin Wilson (517 minutes).

Bibbs led Virginia Tech in minutes (32.7 per game), and used 18 percent of the team’s offensive possessions in ACC play. Alexander-Walker should be in line to snag even more touches; sets that were run for Bibbs can be transferred to the Canadian shooting guard.

Junior guard Ahmed Hill — a talented wing — should be back, too, but he fell to the fringes of Buzz’s rotation as the season progressed, averaging only 15.6 minutes per game from Feb. 7 to March 7.

Ty Outlaw, who shot 48.7 percent on three-pointers in 2016-17, missed the entire 2017-18 campaign with an ACL injury. Outlaw can petition the NCAA for a sixth year of eligibility.

Assuming both Hill and Outlaw return, Virginia Tech could have one of the ACC’s top perimeter trios to play alongside Justin Robinson, an outstanding point guard, Chris Clarke and Kerry Blackshear. On paper, that’s one of the top returning units in the entire conference.

9 ACC Teams make the NCAA Tournament, most of any league