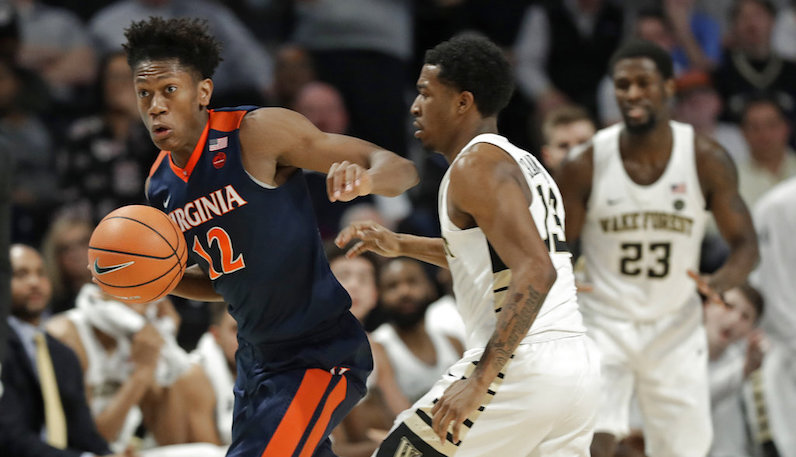 It didn’t take long for De’Andre Hunter to acclimate himself to the rigors of the ACC — offseason workouts with Sheed are already paying off.

It’s a funny caveat of No. 2 Virginia’s excellent start to the 2017-18 basketball season: the team’s best NBA prospect comes off the bench. Yes, Hunter has a future in the professional ranks; it will be interesting to see how long he sticks around Charlottesville.

That’s getting a bit ahead of ourselves, though. For right now, Hunter provides versatility and interior scoring for one of the best basketball teams in America.

To have a player like Hunter that can come off the bench is an incredible advantage for Tony Bennett. It feels similar to the 2013-14 team, which pulled future first round pick Justin Anderson off the bench, too.

Anderson took home the ACC’s Sixth Man of the Year award, and Hunter may be poised to do the same in 2018.

In the team’s opening ACC game, Hunter scored zero points in just six minutes against Boston College. However, since the calendar has flipped to 2018, Hunter has scored 10-plus points in five of Virginia’s six games: 12.3 points, 22.8 minutes over that stretch.

Let’s look at how unstoppable Hunter has been at times this season.

De’Andre Hunter has yet to start a game in his brief career for Virginia; however, the rookie forward’s minute and utility have greatly expanded in ACC play.

After playing less than 16 minutes per game in non-conference action, and scoring 6.5 points per game, Hunter has quickly become an important feature of Virginia’s balanced attack. The 6-foot-7 Hunter plays above 20 minute per game in ACC games; his usage rate has jumped up rapidly to 25.8 percent, per Sports Reference.

That’s a hearty rate, especially once you factor in how infrequently Hunter turns the ball over (6.3 percent turnover rate against ACC competition, a top-10 number) — a principle of Bennett’s offense. This means he getting up shots and getting to the line, which is something to Cavaliers need more of.

Hunter is shooting 61.5 percent on two-point attempts in league games. According to Synergy Sports, Hunter has connected on 66.7 percent of his non-post-up attempts this season — scoring 1.39 points per possession, which ranks 20th in the ACC. He’s been slightly more efficient on these possession types than Omer Yurtseven, Luke Maye and Elijah Thomas.

In a league like the ACC, there’s certain to be plenty of healthy competition for this type of award. Cameron Johnson is fitting in nicely at UNC; however, looks to be a fixture of North Carolina’s first-give going forward, especially as the Heels look to space the floor more. Johnson has started five straight games — half of his appearances for the team, which knocks him out of contention here.

Over at Wake Forest, Keyshawn Woods has been a sensational scorer off the bench for the Demon Deacons. Woods has come off the bench in 13 of his 17 appearances. For the season, he’s averaging 13.4 points and shooting 43.3 percent from downtown.

Of course, this discussion can’t be had without mentioning Chris Clarke of Virginia Tech. Clarke, a ubiquitous talent, has appeared in all 20 games without making a start, and he’s absolutely filled up the stat sheet: 8.7 points, 6.9 rebounds and 3.5 assists on 54 percent shooting.

Clarke is the only ACC player averaging eight points, six rebounds and three assists on 50 percent shooting. He may be the frontrunner to claim this award, although Hunter’s catch-all advanced numbers are slightly superior.

Miami’s Lonnie Walker has had some nice moments, too. But as of right now, you can make a case that the ACC’s top bench reserve is De’Andre Hunter.