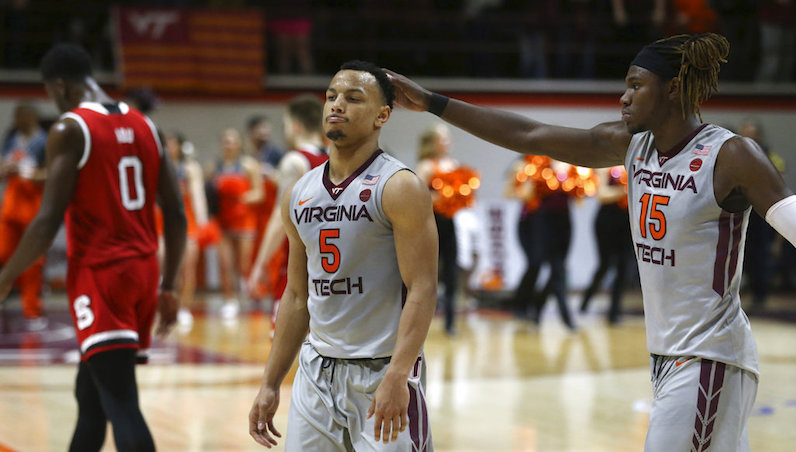 Wednesday night in Blacksburg featured a career performance from Justin Robinson. Virginia Tech’s point guard was a step ahead of NC State defense all night; the junior went for 32 points (on 17 attempts) and four assists.

For the second straight season, Virginia Tech ranks inside the top 25 nationally in adjusted offensive efficiency, per KenPom. Justin Robinson has a lot to do with this.

The ACC is so loaded from a talent standpoint; it’s unfortunately easy for some really good players to not get the recognition they deserve. It’s time for that to change with Robinson, though.

Robinson attempts fewer three-pointers than he did a season ago. In 2016-17, 45 percent of Robinson’s field goal attempts originated from beyond the arc. That’s down to 35.7 percent this season. On a smaller volume of attempts, Robinson has been very accurate, though. This goes beyond just the 40.7 percent on three-pointers listed in his stat sheet.

Amongst ACC players with at least 50 possessions, Robinson ranks fifth (out of 60) in efficiency on spot-up possessions.

What’s the Buzz really about, though?

As nice as Justin Robinson’s improved jumper is, what really makes his game special is his ability to create out of the pick-and-roll.

As a shooter in the pick-and-roll, Robinson has connected on 44.4 percent of his attempts (third in the ACC, minimum 70 possessions), and scored 82 total points, per Synergy — good for ninth most in the ACC. In the win over NC State, when Robinson went crazy, Virginia Tech used 16 via a pick-and-roll ball handler. Robinson accounted for 13 of those possessions.

However, Virginia Tech’s offense hits another level when Robinson uses ball-screen action to create for his teammates.

The Hokies score 1.23 points per possession — No. 5 in the nation, minimum of 100 possessions — and shoot 52.5 percent when Robinson is a passer out of the pick-and-roll. Both of those numbers rank No. 1 in the ACC.

After missing the 2016-17 season, VT’s Kerry Blackshear may be the ACC’s most-improved player