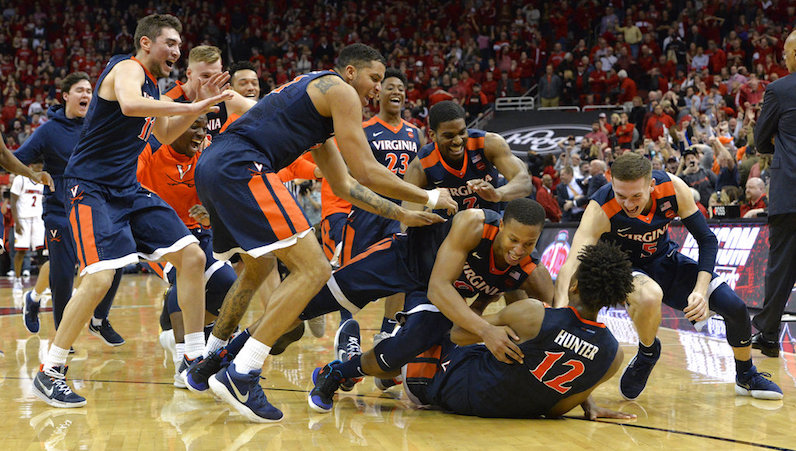 It’s time for another installment of ACC Bracketology. According to BracketMatrix, nine ACC teams are currently projected to land in the NCAA Tournament field — led by No. 1 overall seed Virginia. North Carolina and Duke are both up to No. 2 seeds.

Without further adieu, here’s at least one stat to know for each team.

Virginia pulled off the near-impossible in its win over Louisville. According to KenPom, the Cavaliers had only a 0.7 percent chance of winning that game; this is the 10th lowest win probability this season that a team has had before going on to be victorious.

The game-winning three-pointer De’Andre Hunter hit was his ninth over the last five games. Hunter has made 9-of-14 3PA (64.3 3P%) in that stretch of play.

In the loss at Virginia Tech, Grayson Allen went just 6-of-18 from the field. Four of those field goal attempts came after a handoff, per Synergy Sports, and Allen connected on only one of those attempts for two points (0.5 points per possession).

On senior night in Chapel Hill, UNC drained 13-of-27 3pA (48.1 3P%). Joel Berry led the way, but Theo Pinson, Cameron Johnson and Kenny Williams get in on the act, too. This was the 12th time this season North Carolina has made over 40 percent of its three-pointers in a game; the Tar Heels are 10-2 in those contests.

According to Synergy Sports, North Carolina went an impressive 10-of-19 on spot-up three-point attempts.

The Clemson Tigers will go for ACC win No. 12 this Saturday against Syracuse — something the program has never done before. This means it’s time for Marcquise Reed, Gabe DeVoe and Shelton Mitchell to go to work against the 2-3 zone.

This is Clemson’s first meeting with Syracuse this season; however, it won’t be the team’s first test against a zone. Over 17 percent of Clemson’s half-court offensive possessions have been defended by zones, per Synergy. Clemson has shot 43.1 percent on those possessions, scoring 0.97 points per possession — No. 105 in the nation.

With star sophomore Bruce Brown out, the ball has been placed in the hands of freshman point guard Chris Lykes.

Lykes has done well running the show for Miami’s ball-screen offense. In the win this week over UNC, Miami shot a combined 16-of-25 (64 FG%) on attempts from a pick-and-roll ball handler or a roller, according to Synergy. Lykes himself shot 4-of-5, including three three-pointers, out of the pick-and-roll.

Fair of foul (more like, fowl, am I right?), Virginia Tech’s offense is thought of as a three-point shooting bunch. The team gets 32.6 percent of its points from beyond the arc, which is the sixth-highest rate in the ACC.

Virginia Tech, however, is darn efficient inside the arc, too. According to KenPom, the Hokies are shooting 57.6 percent on two-point field goal attempts. Virginia Tech has connected on 59.1 percent (1.23 points per possession) of its non-post-up attempts at the basket, per Synergy.

All things positive were happening to NC State this week; the Wolfpack enjoyed a four-game win streak in ACC play for the first time since 2006. That was snapped, though, in a midweek performance at Georgia Tech, when NC State’s defense went south.

It may have just been Georgia Tech’s evening, but NCSU allowed the Yellow Jackets to put together its second-best offensive performance of conference play: 1.11 points per possession, according to KenPom. Tech’s most efficient outing in the ACC slate came two months back in a win over Pittsburgh.

Florida State is up to No. 26 in Division I in offensive efficiency; the Seminoles are a dangerous spot-up offense (1.01 points per possession), with a skilled inside-out player in Phil Cofer.

Another strong feature of Florida State’s offense: This team rarely get its shots blocked. According to KenPom, the nation’s 13th tallest team (in terms of average height), has only had 7.1 percent of its two-point field goal attempts blocked this season. That ranks 35th nationally, and ranks second amongst ACC programs (Duke, 6.9 percent).

Even after Thursday night’s heart-breaker to No. 1 Virginia, Louisville is still projected to land in the NCAA Tournament. This means the Cardinals have to keep winning — starting on Saturday at NC State.

With Bonzie Colson back, is Notre Dame poised for a postseason run?