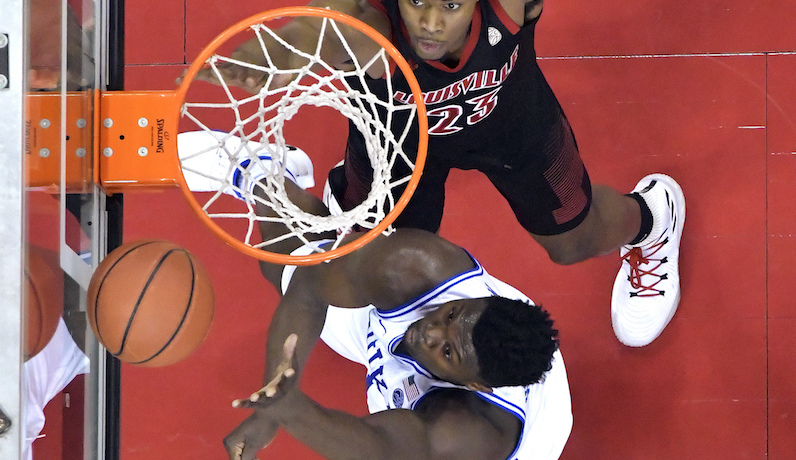 Duke forward Zion Williamson (1) goes up for a layup past the defense of Louisville center Steven Enoch (23) during the second half of an NCAA college basketball game in Louisville, Ky., Tuesday, Feb. 12, 2019. Duke won 71-69. (AP Photo/Timothy D. Easley)

So, um, did anything happen in basketball last night? Oh, there was? Should we take a quick look at what exactly Duke pulled off on the road at Louisville? Yes, great.

For the first 30-31 minutes, Louisville was on fire. The Cardinals played with incredible verve and precision. Chris Mack’s club won 50-50 balls, hit big catch-and-shoot 3-pointers, and took the game to Duke. It bears repeating, too: Louisville was defending like crazy to start this game.

This looked like a program-setting win. And with Zion Williamson on the bench in foul trouble and Duke down 20+ points, post-game party plans had to be in the works.

After a Jordan Nwora 3-ball put Louisville up 59-36 with 9:55 left to play, Alex O’Connell turned the ball over; Williamson was subbed back in, and Duke downshifted to a small-ball lineup. At the time, Bart Torvik had Duke’s win probability at one percent. And it was right around then when things started to unravel, quickly, for Louisville.

Largest comebacks in NCAA history in the final 10 minutes of a game:

As usual, Williamson was dominant. The best player in college basketball did his thing, once again: 27 points (9-of-15 FGA), 12 rebounds (his 10th double-double this season), three steals (his 16th game with 2+ steals), a block and only one turnover. Zion went 4-of-4 on attempt out of the post; he’s now shooting 75 percent on post-ups this season, per Synergy Sports — a ridiculous 1.21 points per possession.

It is still amazing to see just how powerful and quick he is on the low block. Even if he’s in a crowd, if Williamson can drop that right shoulder, it’s basically a done deal. The patience in his maneuvering on this finish is tremendous.

Zion had another first half possession where he showcased part of why his game is so ready for the NBA. Here he run simple side pick-and-roll with R.J. Barrett after Duke clears out the side. Williamson catches the ball in space; however, Steven Enoch, who had a great game, is there to great him with help defense. Without charging into Enoch, Williamson is able to step and dribble around him — while also getting to the other side of the glass for his dominant left hand.

This kind of short-space agility and cunning will perfectly apply to his NBA career. Williamson obviously has all kinds of ball-handling capabilities, but his ability to play off of others while also increasing the team’s overall advantage is a joy. It must be incredibly fun to play with him.

As good as he was earlier in the game, Zion saved his best for last.

Desperate to induce pressure, Duke went to a full-court press from its small lineup — with Williamson as the de facto 5. At the top of the press, Tre Jones and Jordan Goldwire — who had the game of his life — turned into two defensive on-ball menaces. With Williamson and Cam Reddish dropped into coverage, Louisville feared passing the ball over the top.

Louisville, which struggled with turnovers in its overtime defeat against Florida State, played recklessly with the ball; the Cards recorded 17 more turnovers (23 percent turnover rate) against Duke. According to KenPom, Louisville now ranks 154th nationally in turnover rate: 18.5 percent (19.5 percent in ACC games).

A game of hot potato broke out as Duke recorded eight of its 12 total steals in the final nine minutes of game play, including two from Goldwire, two from Jones and three from Williamson.

Seriously, Duke going +25 with Zion on the floor over the final 9:40 is a jaw-dropping number. Remember, kids: Zion Williamson is a good basketball player.

The comeback wasn’t complete, though, without Cam Reddish going crazy, too. In fact, Reddish got the run ignited with two catch-and-shoot bombs from deep. Reddish went 4-of-14 on 3-point looks (28.6 3P%), but all four of those hits (on nine attempts) came in the final nine minutes, as Louisville shrank.

One of those four triples came in transition off a nifty between-the-legs drop pass from Barrett. (This was far from Barrett’s best passing/shooting game, but he made plays to help close this game out, too.) Look at the range on this chuck from Reddish.

This make, which tied the game at 69, was a pivotal leverage sequence for the Blue Devils. Reddish’s 3-ball here jumped Duke’s win probability from 23.5 percent to 56.1 percent.

Reddish has struggled with his shot this season; his mechanics and form have drifted at points. However, he’s been pretty darn good letting it fly in transition. According to Synergy, Reddish has an effective shooting rate of 63.8 percent on transition attempts — No. 11 in the ACC (minimum of 50 possessions).

Now, that effective shooting rate is much higher than his baseline transition shooting percentage (49.2 FG%); that’s because he hunts for these looks on the go. Reddish is 19-of-40 on transition 3-point attempts (47.5 3P%) this season.

Cam Reddish's on-the-move shooting potential is what makes him so intriguing @ 6'9. Great balance, catches on the hop in the half court, walks into 3s in transition with rhythm, can play off hang dribbles. Has made a lot of big shots for a guy who teams about his reliability. pic.twitter.com/5Pex19ys99