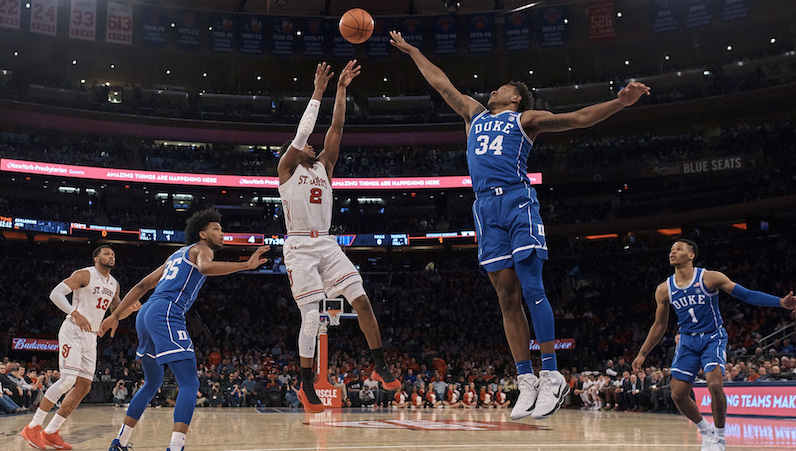 There is an excellent menu of college basketball this weekend. Saturday afternoon looks especially stacked; I’ll be in Durham to watch Shamorie Ponds go to work against Duke. Before the action gets going, though, here are a few things to keep an eye on.

By this point in the season, the Blue Devils had yet to commit full time to zone; as a result, Ponds, Justin Simon and the Red Storm took advantage of Duke’s suspect pick-and-roll defense. (Less than two weeks later, Duke went all in on the zone.)

On this opening play, Ponds spaces to the weak side while Simon dribbles up top. Marvin Clark, defended by Marvin Bagley III, curls up around a dummy screen from Bashir Ahmed, which clears out the middle of the floor. Trevon Duval stays glued to Ponds and misses his help-side assignment on the roll from Tariq Owens — there’s no bump or tag.

The next possession, it’s the same thing. Duval once again sticks to Ponds and misses a bump on a rolling Owens. Wendell Carter Jr. has shown utility as a 1-5 switch defender in the NBA; however, Duke (for the most part) didn’t feel comfortable putting him in that situation a season ago. Thus, he’s in no man’s land here in screen-roll coverage, trying to recover as Owens dives to the rim, sans resistance.

In the second half, Ponds went to work as a pick-and-roll playmaker, too. Here St. John’s uses a little back pick action, which further confuses Bagley and Carter. (That second screen feels largely unnecessary; Owens was getting a clean roll, no matter what. From the weak side, Trent is too late.)

With his off hand, Ponds lobs it up to Owens for another spike. Owens went 5-of-5 on field goal attempts as a roller, per Synergy.

If the defense took away the roll, Ponds could look for his own offense. According to Synergy, Ponds was 5-of-10 (50 FG%) out of the pick-and-roll in this game.

And when Duke went under screens or didn’t rise to Ponds’ level, he made them pay from deep (4-of-8 3PA).

Going back to this game isn’t super instructive when it comes to this season’s matchup; Duke is basically a totally different team. However, there’s still some value. Speaking off this year’s game…

This season, Ponds has really picked up his play. He’s more efficient as a shooter (38.8 3P%, 57.2 eFG%) and his assist numbers have jumped, too: 6.6 dimes per 40 minutes. Ponds is a dynamic, high-usage pick-and-roll creator. The Brooklyn southpaw has scored 1.02 points per possession (51.9 eFG%) out of the pick-and-roll this season, per Synergy, which ranks No. 8 nationally (minimum 100 possessions).

As a team, St. John’s has scored 1.06 points per possession (56.9 eFG%) when Ponds has passed to a player out of the pick-and-roll and that player has used the possession.

Ponds can certainly get his own shot; he’s shooting 40.9 percent (52.3 eFG%) on off-dribble jump shot attempts in the half court this season, per Synergy. However, Duke must pay attention to Ponds away from the ball, too. This relocation maneuver is right out of the Steph Curry playbook.

Ponds has been on one this year. Behind the back in traffic kick out and then relocation to the corner for 3. Insane season. pic.twitter.com/nj3X2KtNlO

On catch-and-shoot attempts in the half court this season, Ponds has a sizzling effective shooting rate of 72.7 percent.

Duke, however, should be far better equipped to check Ponds this season. The personnel is so much better, which has opened up switchy possibilities. Tre Jones is a demon of an on-ball defender; this should make for a fun matchup with Ponds — two of America’s top guards.

At times this season, Duke has switched 1-5. It’s what the Blue Devils went to against Virginia; they brought it back out for some possessions in the Georgia Tech and Notre Dame. This puts Marques Bolden and Zion Williamson on smaller defenders. In the past, that would’ve been untenable with Bolden; however, he’s done well this season with improved mobility.

Williamson is a wrecking ball wherever he goes, but he’s struggled in space against shiftier/smaller guards — a small knock. In the win at Notre Dame, though, he showed that he can learn new tricks on the fly. (Sorry, Prentiss)

When Duke defends ball screens more conventionally — Bolden drops, Jones fights over the top — it’s a very tough defense to crack, too. Williamson is a force on the backend of a defense — blowing up rolls with physical tags or the threat of his frame in passing lanes. Regardless, keep an eye on how Duke defends Ponds in these situations.

All Day Post-ups in the ATL

To put it mildly, Georgia Tech struggles on offense. The numbers don’t lie — No. 256 in adjusted offensive efficiency, 50.1 eFG% — but if you don’t believe me, listen to Josh Pastner. After games, he’s happy to remind you: his team struggles to score and has to win with its defense.

It can be a bit of a struggle to watch this team run half-court offense; there simply isn’t enough shooting to keep the floor spread. There’s little creativity, too. It feels like most of the team’s half-court possessions start with the same rote middle pick-and-roll with Spain action. (Duke gobbled this up with Jones, Williamson and Cam Reddish.)

The Yellow Jackets can still get to some of Pastner’s preferred back cut actions; however, there isn’t always space to run those looks effectively. But Tech has at least one thing it can rely on offensively: Abdoulaye Gueye’s post-ups. (I know, I know: try to conceal your excitement.)

Gueye isn’t exactly an efficient offensive player. He turns the ball over a lot, and he rarely gets to the free throw line. Hear me out, though.

Nearly 50 percent of Gueye’s possessions this season are post-ups, per Synergy: 0.88 points per possession (50.9 eFG%). Within the ACC, only Louisville’s Steven Enoch has posted more frequently (53.5 percent of his possessions) than Gueye (49.3 percent).

He plays with good balance and patience. Gueye, 24, is never in a rush and he’s strong. The dude can back you down and create space. Plus, he has a nice little up-and-under move to get to. In the Duke and North Carolina games, Gueye was featured liberally out of the post — 9-of-17 (53 FG%) on post-ups.

The man they refer to as “A.D.” can go to work against single coverage. He’s a hook shot machine, too.

There’s a lot to Lyke

It’s been a rough season for the Miami Hurricanes. With a limited rotation, Miami has struggled — four straight defeats, 1-7 in the ACC. The team has had second half leads a several ACC games, but a seven-man rotation has just seen these games slip away.

With the way Chris Lykes is playing, it’s hard not to feel for the dynamic sophomore point guard. The 5-foot-7 Lykes is playing over 33 minutes per game and has a usage rate that’s neighboring on 28 percent. That’s a serious ask and, for the most part, Lykes has delivered.

Teams can load up to stop Lykes with traps and multiple defenders. It’s like watching Kemba Walker play for the Charlotte Hornets — opponents can throw the kitchen sink at Lykes, but he still manages to speed dribble in and out of traffic for buckets. He’s so low to the ground.

Miami’s offense features a lot of ball screens, and the Hurricanes love to run this drag screen look for Lykes. On the season, Miami has scored 1.14 points per possession (64.8 eFG%), which is great, on pick-and-roll possessions when Lykes has passed the ball.

Miami does whatever it can to get Lykes some space to attack downhill in the half court — look at how high Anthony Lawrence (85 eFG% on pick-and-pops, per Synergy) sets this screen. Lykes has shot the heck out of the basketball off the bounce, too: 1.13 points per possession (56.4 eFG%), No. 6 in the ACC.

One Number to Know: Kyle Guy’s gravity, Nassir Little gets up, NAW locks down