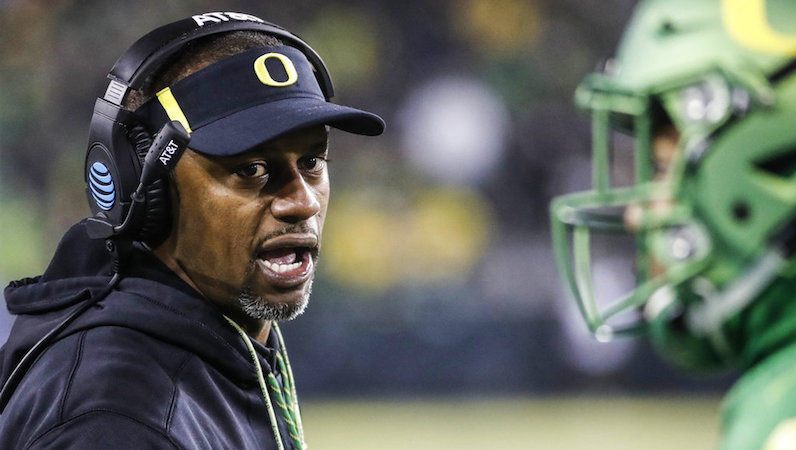 It didn’t take Florida State long to react; less than a week after Jimbo Fisher’s departure from the school, FSU has his replacement. Tuesday afternoon, it become official: Willie Taggart is the new football coach at Florida State.

Taggart, who hails from Bradenton, Florida, has been a head coach in college football for eight seasons now. Most recently, Taggart led Oregon to a 7-6 record during his lone season in Eugene. Previously, Taggart cultivated a reputation as a program-builder at Western Kentucky (where he was a quarterback in the 1990s) and South Florida.

In his final season with USF — 2016 — Taggart led the Bulls to a 10-2 record, and a bowl victory over South Carolina. South Florida finished No. 19 in the AP Poll that season.

Since Florida State launched its search, Willie Taggart has been the top candidate, presumably. He continued to recruit for Oregon over last weekend, which caused some confusion.

Looking forward to a great day tomorrow with our team. Practice, find out where & who we play in the bowl game, 2017 Team banquet and then back on the road recruiting. Go Ducks! #TheMovement18

However, those mixed messages are done: Taggart is the third full-time coach at Florida State since 1976, when Bobby Bowden first took over.

Taggart meet with FSU officials this afternoon in Arizona; he will reportedly inform his soon-to-be-former team later this afternoon. According to multiple reports, FSU is Taggart’s “dream job.”