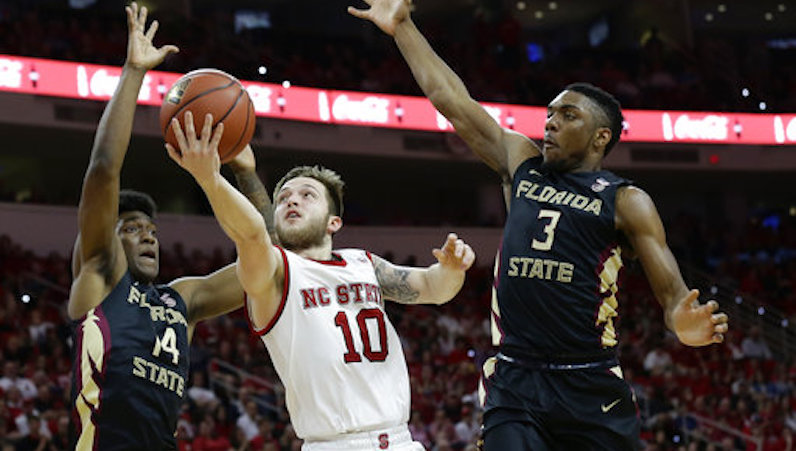 Tough news for NC State: Sophomore guard Braxton Beverly has fractured a bone in his left hand, which will require surgery. The injury occurred during practice last Friday; surgery is set for Tuesday (Oct. 23). There’s no timetable for his return.

As a freshman, Beverly did some really nice things for the Wolfpack on offense. His range shooting was crucial; nearly 63 percent of his field goal attempts were three-pointers, and he hit at an effective clip: 60-of-156 (38.5 3P%). For the season, Beverly posted a true shooting rate of 54.2 percent.

According to Synergy Sports, Beverly was one of the top spot-up players in the conference. Beverly scored 1.1 points per possession on spot-ups (57.1 eFG%) — good for 11th best in the ACC amongst player with at least 100 possessions.

NC State has plenty of depth at the point guard position, which helps soften some of the blow. Markell Johnson, who logged a lot of minutes with Beverly last season, is one of the premier pick-and-roll distributors in the nation; plus, Missouri transfer Blake Harris is eligible at the start of the season, too.

On the wing, NC State will need production from two transfer who are coming off redshirt seasons: Devon Daniels and CJ Bryce. Can those guys hit enough three-pointers to keep the offense spaced out?

Sam Hunt and Al Freeman have used up their eligibility; Omer Yurtseven is a Hoya now. Hunt and Freeman were spot-up demons last season, too, and Yurtseven emerged as a pick-and-pop beast — a true stretch-5. Those three combined to make 143 three-balls last season.

Beverly — whenever he does return — will be counted on to help replace some of that production. In the meantime, Daniels and Bryce must be ready, too.