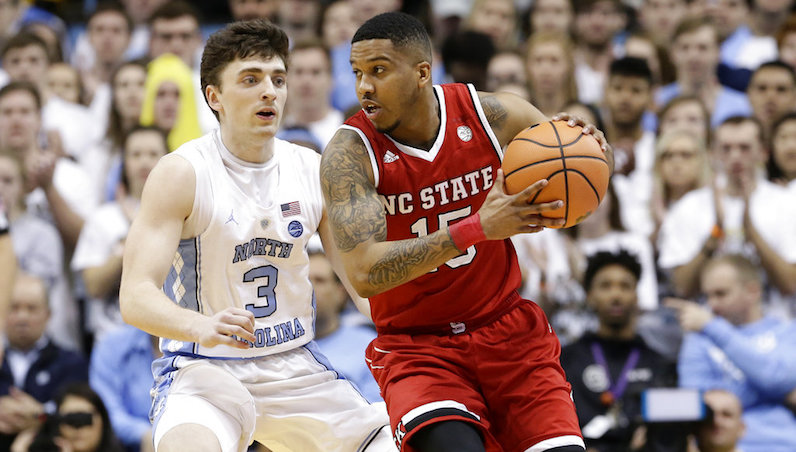 In NC State’s 82-66 win over Boston College, the Wolfpack caught fire from beyond the arc. Over the final 13 minutes of play in the first half, NC State connected on 17-of-19 field goal attempts. That include a stretch of 13 makes in a row, and three three-pointers from graduate transfer Sam Hunt.

Sam Hunt has a role to play, and he plays it well.

He’s here for a reason

As Kevin Keatts got to work on putting together his first roster, he knew he needed to add shooting; the graduate transfer pool provided him with two players — Al Freeman and Sam Hunt.

Freeman has been better as of late; Hunt, however, remains a steady option. On the season, 90 percent of Hunt’s field goal attempts have come from beyond the arc. In conference play, that’s gone up. Against ACC foes, Hunt has attempted 48 field goals — 46 of which are three-pointers, 95.8 percent.

Hunt is shooting 43.5 percent on three-pointers in ACC competition. According to Sports Reference, Hunt is one of only eight ACC players in league game to have scored at least 60 points this season on fewer than 50 field goal attempts. (UNC’s Sterling Manley has earned this distinction, too.)

Nearly 66 percent of Hunt’s possessions are of the spot-up variety, per Synergy Sports. On those looks, Hunt is shooting 41.3 percent — with an effective rate of 60 percent — and scoring 1.18 points per possession, which ranks 13th in the ACC.

A low turnover rate mixed with long range shooting is an efficient blend. Hunt has an offensive rating of 121.8 points per possessions this season, according to KenPom. That’s stayed level in ACC play, too: 120.4 points per 100 possessions.

Last season at NC A&T, when tasked with a larger share of the offense, Hunt produced an offensive rating under 99 points per 100.

What this means for NC State’s offense

So, we’ve established that Hunt is a reliable player, and an accurate perimeter shooter. When Keatts turns to his bench, that recipe provides the ideal spacing agent for NC State’s pick-and-roll offense.

When opponents dig down to curtail those rolls, or trap Markell Johnson — a dynamic pick-and-roll playmaker — then Hunt, Freeman and Braxton Beverly need to be able to make teams pay with weak-side shooting. And when NC State scores on offense, it allows the Pack to also establish its full-court pressure.

Over the last two seasons at NC A&T, Hunt won just 13 games; now Hunt’s shooting is critical to keep the machine running for a 19-9 NC State team that’s currently projected to land in the NCAA Tournament.