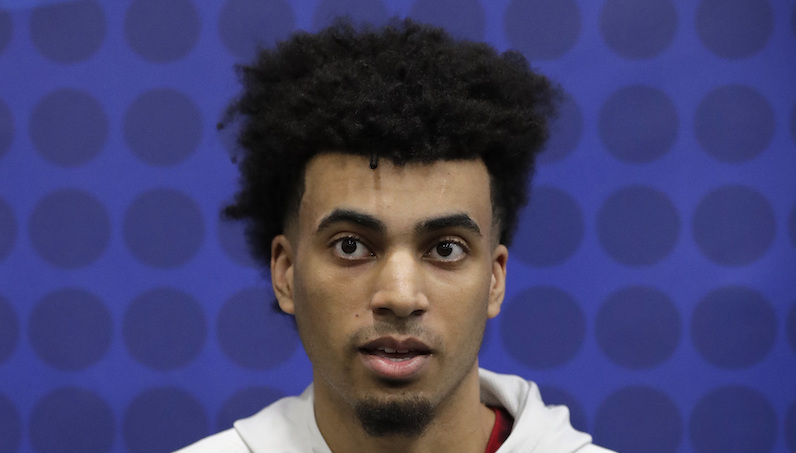 Jordan Nwora speaks with the media during the second day of the NBA draft basketball combine in Chicago, Friday, May 17, 2019. (AP Photo/Nam Y. Huh)

While a final decision from Louisville sharpshooter Jordan Nwora is still incoming, the Cardinals know that they will have veteran center Steven Enoch back for the 2019-20 season. That’s good news for Chris Mack, heading into Year 2. Enoch spent the last two months testing the NBA Draft waters.

Jordan Nwora will participate in the BDA Pro Day today in California and then make a decision on his future. If Louisville gets Nwora back, Cards will be among the elite of the elite.

The 6-foot-10 Enoch displayed some stretch to his offensive game as well: 14 3-pointers (36 3P%). In ACC play, he posted an offensive rebound rate of 9.5 percent, which ranked 15th in the conference, according to KenPom.

Enoch will join a powerful post rotation — along with fellow veteran Malik Williams and highly-ranked freshman Aidan Igiehon, a top-60 prospect in the 2019 class.

Back in late March, not long after Louisville’s season ended, Nwora announced his decision to enter the 2019 NBA Draft, too. Voted the ACC’s Most Improved Player this season, Nwora emerged as an interesting (big) range shooter. He averaged 17 points and 7.6 rebounds per game.

Nwora was invited to participate in the draft combine; however, he chose not to participate in five-on-five scrimmages due to a reported calf injury. He did get measured, though — checking in with a 6-foot-10.5 inch wingspan.

Here are a half-dozen guys that are toss-ups as we hit the deadline:

After a promising freshman season in 2017-18, Nwora excelled in a more-featured role as a sophomore. An All-ACC selection, Nwora also evolved into an NBA prospect. If he chooses to return to Louisville, Chris Mack could have quite the squad for his second season — and Nwora would give the Cards a piece to center the offense around.