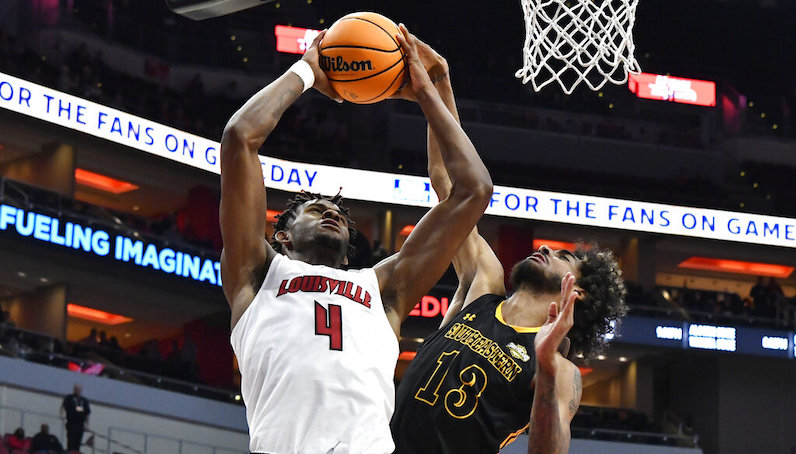 Roosevelt Wheeler is the latest player to re-commit to the Louisville basketball program. The freshman forward/center announced on Twitter that he will return to Louisville and play for first-year head coach Kenny Payne.

Roosevelt Wheeler announces he’s returning to Louisville. He was the last scholarship player from this season’s team who hadn’t entered the portal or declared his plan to return. https://t.co/My4MqN8jPs

The per game statistics for Wheeler don’t accurately portray his potential. Wheeler has great length and mobility; there are a variety of ways to feature his skill set on both sides of the floor.

On a per-possession basis, Wheeler was also a strong rebounder, too: 20.7 percent defensive rebound rate.

Wheeler was a Top 80 prospect in the 2021 class, garnering a 4-star rating from 247 Sports. He committed to Louisville over NC State, Georgetown, Hampton and DePaul.

After taking over, Payne quickly established relationship with multiple Louisville players. There’s still a good amount of turnover within the program; however, Wheeler is one of several players to sign up to play with a new coaching staff. Wheeler joins Sydney Curry, Jae’Lyn Withers, El Ellis, JJ Traynor and Mike James in terms of the returnees.

The quartet of Curry, Wheeler, Withers and Traynor is a really strong frontcourt rotation for the 2022-23 season. Ideally, there’d be a little more stretch/shooting in the frontcourt mix; however, there’s a lot of talent within this group.