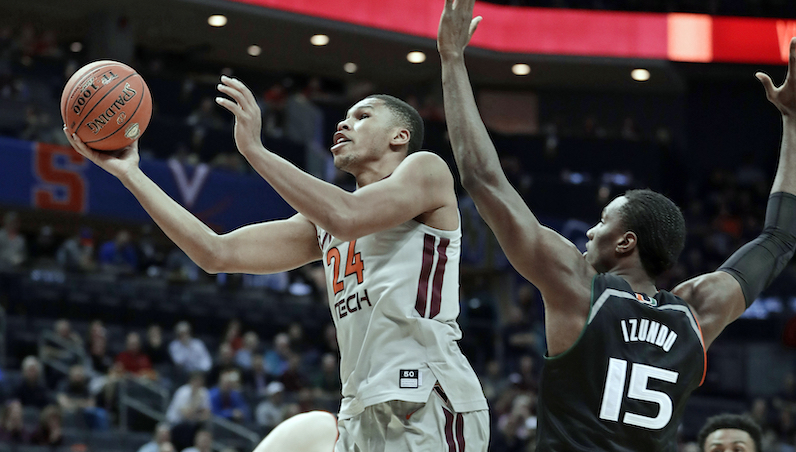 According to college basketball insider Jon Rothstein, Kerry Blackshear Jr. could still return to Virginia Tech for the 2019-20 season. That information was relayed to Rothstein via Virginia Tech coach Mike Young, who recently joined Rothstein’s podcast.

Mike Young tells me that Kerry Blackshear's situation at Virginia Tech remains "up in the air". Blackshear is an early entrant to the 2019 NBA Draft and also can be eligible immediately as a grad transfer.

If Blackshear were to return to Blacksburg for next season, it would be a significant boon for Young and the Hokies.

After a strong sophomore season in 2017-18, Blackshear made a leap during the 2018-19 campaign. He averaged career highs in points (14.9), total rebounds (7.5), offensive rebounds (3.1) and assists (2.4). Blackshear played 30 minutes per game while his usage rate jumped to almost 27 percent. Despite the added offensive weight, Blackshear remained efficient — with a 58.7 percent true shooting rate.

More impressively, though: after the midseason injury to point guard Justin Robinson, Blackshear’s role shifted. The 6-foot-10 stretch 5 had to do more than just post-up and run screen-roll actions; Blackshear was tasked with operating as an offensive fulcrum.

Virginia Tech used Blackshear as a passing hub at the elbows, free throw line and the side posts — running cutters, handoffs and split actions off of him.

With he and Nickeil Alexander-Walker running the show, Blackshear averaged over three assists per 40 minutes in ACC play. After the season, he was named second team All-ACC.

After the season, Blackshear added his name to the pool of players for the NBA Draft, and entered the NCAA’s transfer portal. He’s received interest was several major programs, including UNC and Kentucky. Blackshear was not invited to compete in last week’s combine; he’s a skilled player, no doubt, but right now he’s not exactly a real NBA prospect.

As Young indicated, Blackshear has yet to close the door on a return to Virginia Tech, too. If he does decided to play one more season for the Hokies, Blackshear would return to the ACC as one of the league’s most accomplished players, and give the Hokies a go-to target on a nightly basis.