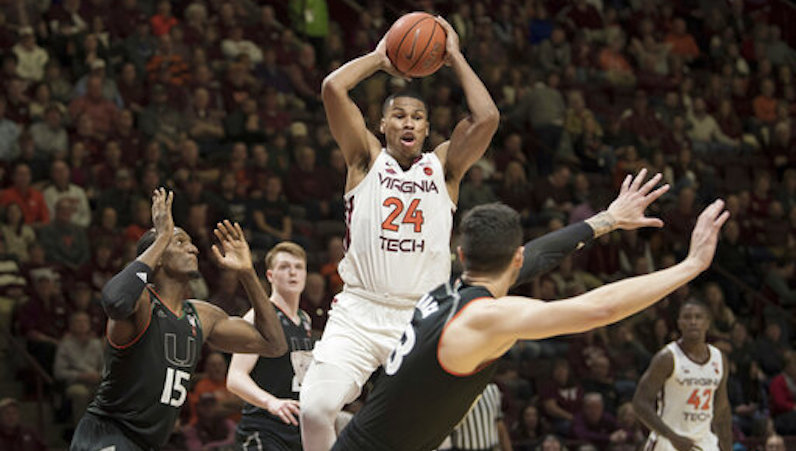 Virginia Tech forward Kerry Blackshear Jr. (24) sets to pass to a teammate against Miami during the second half of an NCAA college basketball game in Blacksburg, Va., Friday, March 8, 2019.(AP Photo/Lee Luther Jr.)

One of the more interesting players in college basketball continues to work his way toward next season’s destination. After entering his name into the 2019 NBA Draft pool and the NCAA’s transfer portal in mid-April, we now know that Kerry Blackshear Jr. will likely be back in college hoops next season. Blackshear withdrew from the draft.

Virginia Tech's Kerry Blackshear is withdrawing from the 2019 NBA Draft and still exploring all of his potential options as a grad transfer, per his Instagram page.

As Jon Rothstein notes, Blackshear looms as one of the best potential graduate transfers available this offseason, though the door remains open for a return to Virginia Tech. Kentucky is one of the many programs that’s trying to land the 6-foot-10 Blackshear. So, too, has Texas A&M, where Blackshear’s coach at VT, Buzz Williams, now works.

It’s worth pointing out, too: EJ Montgomery and Nick Richards both return up front for Kentucky. The Wildcats play a lot of twin-big lineups under John Calipari; however, minutes in the rotation just got tighter.

(Note: Another SEC program, Florida, is also in the mix for Blackshear.)

With Justin Robinson injured, Blackshear — along with Nickeil Alexander-Walker — took on a larger playmaking role this season. Tech used Blackshear as a passing hub from the high post/elbow areas, running cutters or split actions off of him. During ACC play, Blackshear posted a 19.2 percent assist rate.

Blackshear was one of 12 Division I players this season listed 6-foot-10 or taller that posted an overall assist rate of 15 percent.

For his efforts, Blackshear was named second team All-ACC. If he does in fact return to Blacksburg, it would be a major get for new coach Mike Young. Instantly, he would have a star big man to function as the nucleus of his offense. Blackshear would become a lock to land on the league’s preseason all-conference first team, too.

However, if he doesn’t return, Blackshear’s departure would make for a historical moment for ACC Basketball, as veteran reporter David Teel notes.

If #Hokies F Kerry Blackshear transfers, @accmbb will not return a first- or second-team all-league player for first time in its history.