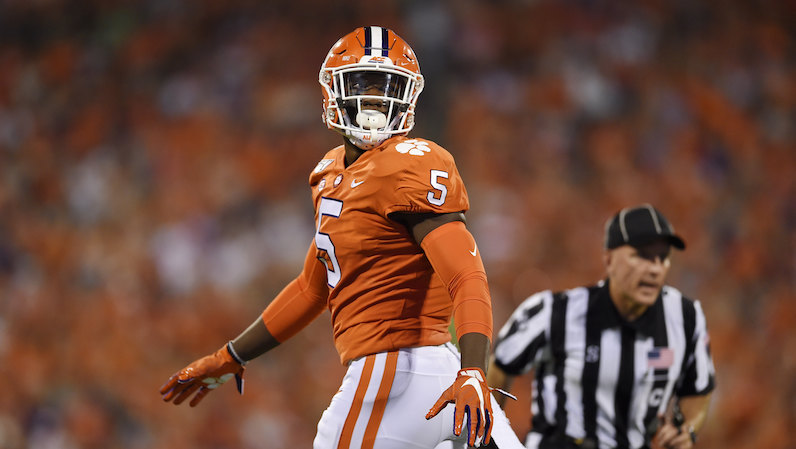 Clemson's K.J. Henry reacts to a play during the first half of an NCAA college football game against Charlotte Saturday, Sept. 21, 2019, in Clemson, S.C. (AP Photo/Richard Shiro)

It may not have looked all that pretty, but the ACC did manage to go 8-1 in non-conference games this weekend. In the one league matchup, Florida State hung on against Louisville. The league has two teams in the AP Top 25 — with Wake Forest right on the doorstep. With that in mind, let’s jump into this week’s ACC Football Power Rankings.

Clemson made things look easy in a 52-10 victory over Charlotte, to the surprise of no one. Trevor Lawrence attempted just nine passes in this game as Clemson played 110 different players in this game. One of those Lawrence completion was a 58-yard touchdown connection with Tee Higgins.

The junior wideout, in the midst of a monster year (23.5 yard per catch, No. 2 in the ACC), is now one of only five FBS players with at least three receptions of 50+ yards this season.

Up Next: at North Carolina

As its run game sputtered (2.4 yards per carry), Virginia managed to avoid a serious scare against ODU — winning 28-17. Early in the second quarter, Virginia found itself down 17-0. However, Bryce Perkins — 7.3 yards per pass attempt, two total touchdowns — got things going. After that, the Cavaliers responded on defense, too.

Charles Snowden is a terror from the edge and this team’s linebackers, including Zane Zandler, are absolutely excellent. Snowden had two sacks against ODU, which gives him three now for the season. Virginia is currently tied with Ohio State and Florida for No. 1 in the FBS with five sacks per game.

CHARLES SNOWDEN NEED TO HEADGE ON SOME BALL SCREENS FOR OUR SQUAD THIS YEAR. . TWO SPORT KILLA 🔶⚔️🔷 #PACKLINE @LockerRoomInc

Oh, once again, Perkins hooked up with Joe Reed — who continues to add chapters to an excellent senior year — for another touchdown, his third of the season.

Halloween takes place more than a month from now, but will get scary over the next three weeks for the Cavaliers. After a road date at Notre Dame, and a bye week, Virginia will travel south to play Miami (Oct. 11).

Up Next: at Notre Dame

Wake Forest made quick work of Elon in an I-40 battle on Saturday, winning 49-7. Once again, the passing triangle of Jamie Newman, Sage Surratt and Scotty Washington took flight.

The performance by Surratt and Washington was the first time in the FBS this season that a pair of teammates have both gone for at least eight receptions, 100 yards receiving and two touchdowns in the same game. They are good at football!

Wake Forest is playing at a breakneck pace on offense and doing so with style, too. Next Saturday at Boston College is a critical early-season matchup.

Up Next: at Boston College

Two Saturdays ago, Pittsburgh let a golden opportunity slip away on the road at Penn State. However, a week later, Pitt stunned the college football world, defeating Central Florida 35-34. Pitt entered this game as a 10-point home underdog.

On the game’s crucial play — a 4th-and-3 from inside Central Florida’s 5-yard line — the Panthers dipped into their bag of tricks for a wild game-winning touchdown. Over the last two weeks, Pitt is 5-of-5 on fourth down conversions.

And here’s where we are now with the Panthers after four games: Pitt’s two losses have come against two top 25 teams, and the win over UCF is one of the best wins an ACC team has bagged so far this season. It came at a necessary time, too.

Heads I win, Tails you lose: one-possession games can be a cruel flip of the coin. After the first month of the season, North Carolina is 2-2 through four games — all one-possession affairs. The Tar Heels had a chance to send Saturday’s game against Appalachian State to overtime, but a desperate 56-yard field goal attempt by Noah Ruggles couldn’t make it the distance.

All things considered — North Carolina has to still feel pretty good at being .500 heading into the Clemson game.

Miami looked real rough in its 17-12 home win over Central Michigan, which went 1-11 during the 2018 season. Once again, the Hurricanes committed far too many penalties — 13, to be exact. In the loss Aug. 24 loss to Florida, Miami committed 14 penalties. Those are the only two games in the ACC this season in which a team has committed 13 or more penalties.

The Hurricanes went just 1-of-10 (10 percent) on third down conversion plays, too, which isn’t going to cut it. For the season now, Miami has converted less than 24 percent of its third down opportunities into first downs.

The defense played pretty well and that’s notable — forcing three turnovers and allowing less than 250 t0tal yards. This remains a hard team to figure out, though.

Florida State picked up its first ACC win of 2019 on Saturday, defeating Louisville 35-24. However, things continue to feel just super wobbly with this program, right now. FSU nearly coughed up another game after jumping out to a three-score lead — 21-0 in the first quarter.

The Seminoles allowed 24 unanswered points from the Cardinals, though, and trailed for a good chunk of the fourth quarter. If not for key plays from Florida State’s two offensive stars — Tamorrion Terry and Cam Akers, who ran for three more touchdowns — this could’ve been a disaster for FSU, which saw starting quarterback James Blackman sprain his MCL. (In relief of Blackman, transfer Alex Hornibrook completed 15-of-20 passes for 255 yards and two touchdowns.)

Perhaps more concerning, though, was the lack of attendance at Doak Campbell Stadium for a conference game on Saturday.

This program is in a weird place right now under second-year coach Willie Taggart. As fan interest continues to slide, FSU must continue to try and correct on-field issues, too.

Up Next: NC State

NC State’s offense looked shaky at times against Ball State, including three turnovers. It took the Wolfpack over 1.5 quarters of game play to score their first touchdown, too — a three-yard Ricky Person Jr. rushing score.

For the second straight game, NC State failed to generate a lot of pressure defensively; the Pack has just three sacks in their last two games. The return of star defensive end James Smith-Williams should help here, though.

DE James Smith-Williams, who has missed the past two games with an ankle/foot injury, is expected to play against FSU on Saturday.

RB Bam Knight, who tweaked his hamstring against Ball State, is also expected to be able to play at FSU on Saturday

Thayer Thomas made a huge play for NC State early in the third quarter, returning a punt 76 yards for a touchdown. Thomas is the only FBS player this season with one passing touchdown, one receiving touchdown and one punt return touchdown.

Up Next: at Florida State

After jumping out to a 21-0 lead over Western Michigan, things ended a little too close for comfort if you’re Syracuse. While Syracuse won, 52-33, the team’s lead was shaved down to five points with a minute to play in the third quarter.

This was a strong outing for Syracuse’s backfield, though. Tommy DeVito accounted for five total touchdowns — four passing, one on the ground — and Moe Neal ran for 123 yards and two touchdowns, too.

Tommy DeVito has completed nearly 80% of his passes and has 4 touchdowns… we good with Tommy DeVito now?

Up Next: Holy Cross

The table is set this Friday for a very interesting measuring-stick game between two 2-1 teams: Duke and Virginia Tech. There’s been some interesting line movement for this game as well. Duke opened as a 6.5-point underdog, initially, on Sunday. However, on Monday morning that line swung four points in Duke’s direction. Keep in mind: this is a road game for the Blue Devils.

Rutgers isn’t a very good football team — No. 102 nationally in ESPN’s FPI — so it’s not super encouraging that Boston College had issues on Saturday. A win’s a win, though, especially over another Power Five program.

With Scott Satterfield at the helm, the needle seems to be pointed in the right direction for Louisville; however, the Cardinals couldn’t quite pull out the road upset at Florida State — even after they escaped a 21-point hole in the first half.

Four games in it doesn't make it any easier to stomach, but, you can see this is obviously a team with more than they had last year but less than 60:00 of focused football.

After three lackluster performances, Virginia Tech will have close to two full weeks to prepare for Duke this Friday. The Hokies could really use a clean performance and, more importantly, a victory over the Blue Devils.

You can’t lose during the bye week, right? Georgia Tech had a week off to prepare for its second road game of the season — Temple, the former employer of Geoff Collins.

Up Next: at Temple