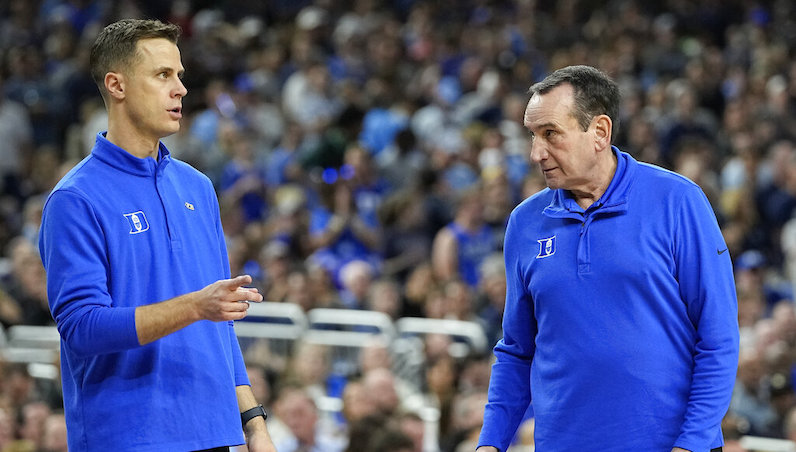 Proctor and Mgbako join a trio of prior 2023 commitments the Blue Devils already had lined up: 5-star point guard Caleb Foster, 5-star shooting guard Jared McCain and 4-star forward forward Sean Stewart. McCain is a more recent addition; he picked Duke over Gonzaga and UCLA back in March. Foster and Stewart committed to Duke in the back half of 2021: Foster in September, Stewart in late December.

Jon Scheyer is on some kind of recruiting heater right now. We’ll find out soon how he performs with all of this talent, but it’s hard to set the table for your own success to start your head coaching career more than he has with the talent he has incoming in the next two classes

Mgbako is the headliner; he’s a Top 5 prospect in the 2023 class. However, all five of Duke’s commitments rank inside the Top 30 of the class, according to 247 Sports. This is a monster class.

This six-man class consists of four of the Top 15 prospects in the 2023 cycle: Lively, Filipowksi, Whitehead and Mitchell. Schutt, one of the top prep shooters in the country, is a Top 60 prospect. He’ll likely shoot his way onto the floor, quickly.

Reeves will likely redshirt, essentially functioning as a developmental bridge from 2022 to 2023.

Simply put: This is an incredible start to a tenure for Scheyer. What Scheyer and his staff are able to do with these players will set the tone for the start of the Post-K era of Duke basketball.

With an incredible 2023 class written in pen, Duke can focus on other topics at hand. First, the Blue Devils will need to figure out what guards Trevor Keels and Jeremy Roach plan to do with regards to the NBA Draft. (Wendell Moore Jr. could factor into these hypotheticals, too, although he seems more likely to head to the NBA.)

Roach is the most likely, of Duke’s rotation players this season, to return. Honestly, the Blue Devils need his on-ball presence at the point guard spot. Currently, Duke’s 2022 class doesn’t have a point guard. There have long been murmurs of Foster reclassifying from 2023 to 2022, but until that actually happens (if it does), it’s hard to price it into the equation. Although if Roach were to enter and remain in the draft, that could accelerate the timeline for Foster.

Next, Scheyer and his staff can focus in on possible transfer portal additions. Backup center Theo John proved to be a key piece off the bench for Duke this season. Once again, the Blue Devils could look for those types of back-end rotation players to round out the roster. Alternatively, Duke could look to add a more prolific transfer piece, but that may be a tougher sell given the volume of incoming talent.

Finally, the Blue Devils have a head-start on assembling their 2024 recruiting class as well.