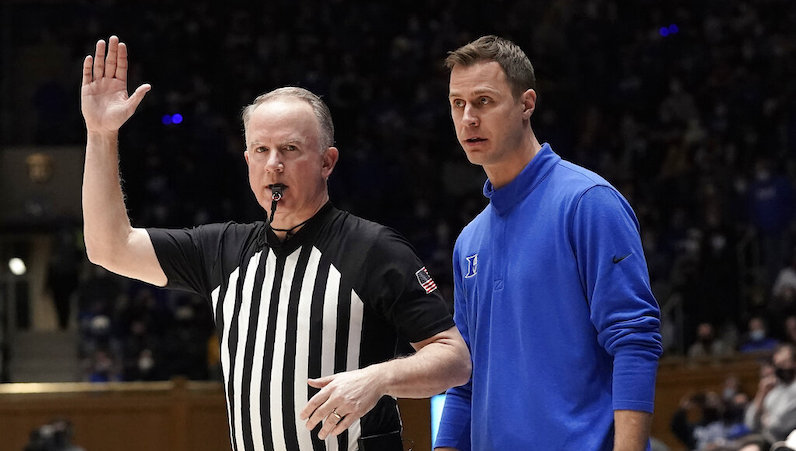 Tyrese Proctor is one of the top international names for the 2023 recruiting class. The 6-foot-4 Australian was in attendance Tuesday night (Feb. 15) at Cameron Indoor Stadium to see Duke defeat Wake Forest.

Proctor, who represents the NBA Global Academy (Canberra), is currently an unranked prospect, according to 247 Sports. However, word is: if Proctor played prep basketball in the States, he’d be a blue-chipper and one of the elite guys in the class.

Duke offered Proctor a scholarship back on Jan. 25.

During the game, Proctor sat behind Duke’s bench, as do most/all visiting recruits. Prior to the game, Proctor entered Duke’s locker room and came out with the team during an early portion of pre-game warmups.

Unsurprisingly, coach-in-waiting Jon Scheyer is Duke’s lead recruiter for Proctor. Of course, several other premier programs are in on Proctor, too.

Among those teams are Arizona; the Wildcats are one of the top teams in the country and feature a roster stocked with international talent. Bennedict Mathurin, Arizona’s leading scorer, is another NBA Academy success story, who hails from Montreal. Mathurin projects as a lottery pick in the 2022 NBA Draft.

Tennessee is also after Proctor. Currently, Rick Barnes has three international players on his roster. One of those players, Santiago Vescovi, hails from Uruguay. Vescovi also played at the NBA Academy in Canberra, Australia.

Louisville has also talked with Proctor; however, with a coaching change, things could shift.

Duke already has two 2023 commitments: 5-star point guard Caleb Foster and 4-star forward Sean Stewart. Foster and Stewart both rank as top-30 prospects in the class. Back in December, Duke received a commitment from Christian Reeves, a 3-star 2022 center. Reeves is expected to redshirt and would (unofficially) be a part of the 2023 class.

Recently, the Blue Devils also hosted 5-star shooting guard Jared McCain for an official visit. McCain is from California, but Duke is in good standing with the West Coast prospect.

One of Duke’s top role players from the last 5-10 years arrived from Australia, too: forward Jack White (2016-20). After his four-year career, returned to play professional basketball in Australia. During the 2020-21 season, White was a member of Melbourne United, which was the NBL title that season.